When it comes to trap development, too much glory goes to the upper traps – and for fair reason. They’re the beefy slabs that belong on top of your shoulders, and having their development can complete a strong physique from an aesthetic standpoint, but also create a ton of functionality from a performance standpoint. The upper traps are huge stabilizers to exercises like farmer’s walks, bench press, and strict press.

With that said, too much attention to the middle and upper traps can give the lower traps (often referred to as the trap 3) the short end of the stick. The resulting problem could end up being poor posture, rounded shoulders, and a poorly developed upper back.  To bring things a step further, the upper traps will dominate every pull movement by firing first, which can start messing with your scapular movement. In English, your shoulder blades may not have the support systems they need to properly do what they’re meant to do.

That’s why developing the lower traps is so important. In truth, the lower traps aren’t a separate muscle than the upper traps. They’re just a continuation of them, and they finish toward the middle of the thoracic spine. That’s a long way down. Needless to say, it’s a large portion of muscle to neglect. 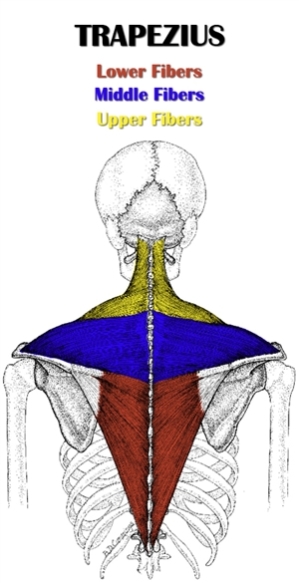 A light dumbbell and a bench is basically all you need to pull this movement off, and it can serve as a game changer for low trap development. Since it’s a very isolated movement, it’s imperative that you don’t overshoot and use a heavy dumbbell – you’ll just end up doing a deltoid front raise.

The horizontal position you assume with your torso is exactly what’s needed to have the traps lever the arm up, and once you get the pattern in the groove, you’ll feel to light up like a bonfire. As you can see in the video, I’m using a neutral grip, and pretending to “toss” the weight to an imaginary person in front of me. Depending on your width and muscularity, it may be easier to angle the arm outward slightly.  The emphasis should still be on setting and tossing.

Thinking about things from a posture standpoint, developing the lower traps is crucial. Because of their direction of contraction, having them developed and producing tension means the ribcage will be held taller (to pull the shoulders down and the chest high), and it will only contribute to the shoulders being pulled back and not rounded forward. With clients who have shoulder issues and kyphotic posture, this is a staple that enters my programs.

Remember: If you don’t pull your shoulder back first, you’re going to dominate this movement using the deltoids.