Get Stronger Quads – and a Stronger Squat – by using 1.5 Reps

Many lifters who are frustrated with their squat performance have to deal with some mechanical issues that’s preventing them from achieving the optimal geometry. That sounds really fancy-shmancy, but let me explain.

The squat is one of the most universally transferable lifts in the game. Not doing them will give a majority of people more disadvantages than doing them ever will. With that said, it’s important to understand how they work.

Squats are more of a knee-dominant pattern, and less of a hip-dominant pattern. Simply put, if you’re finding you have to hinge a whole lot at the waist in order to pull them off, you’re probably making it pretty hard on your body, and should take a closer look at your levels of mobility.  I’ve found this to be the case with many taller lifters and lifters with longer extremities.

The ideal goal is to have a fairly upright torso and to be able to access a low seat position for a good depth squat. Being able to achieve full range of motion should be high on a lifter’s priority list, so they can then decide whether or not they want to use that full range in a given workout, depending on that workout’s goal. We shouldn’t have to worry about mobility restrictions forcing us into partial ranges. 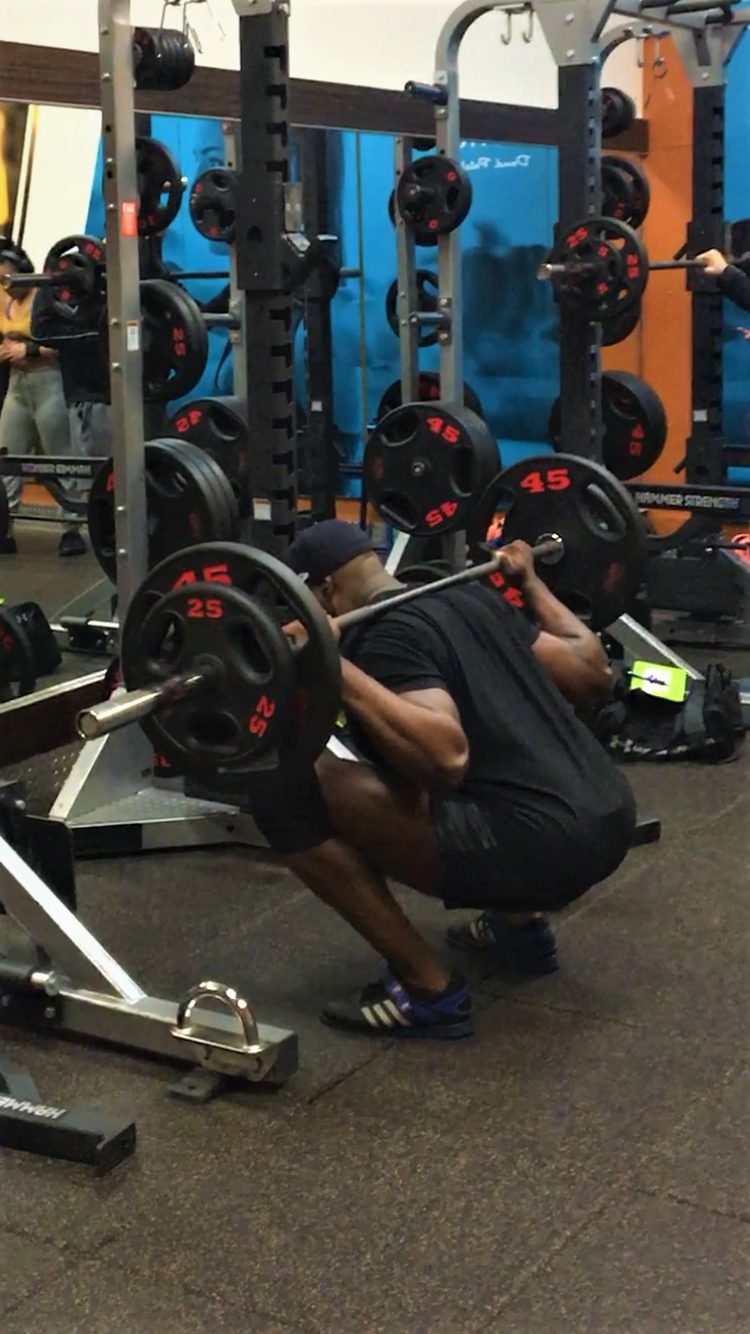 Laying the foundation for a good, deep squat comes from assessing weak links throughout the body. In a perfect world, regardless of your anthropometry, your torso angle should generally match your shin angle (see photo). This will lead to a solid range of motion, and may even mean your knees have to pass your toes to pull it off.  There’s one weak link that usually kills most lifters’ backs and kills their squat depth too, and it makes sense to assess it before jumping to any conclusions.

In my experience, I’ve found that most lifters who suffer from the above frustrations, suffer from ankle immobility – in specific, the ability to dorsiflex. When this is present, the knee won’t be able to track too far forward over the toe to create the correct shin angle. And for the record, it’s OK for knees to pass toes.  Stretching the calves, releasing the plantar fascia, and doing heel walks or toe raises to help release the restricted muscles on the back of the shin, and activate the weak muscles on the front of the shin.

To get a better quality squat, don’t forget to practice getting into a deep squatting position as it is. It’s one thing to be vehemently opposed to losing your spine position under load, but you can’t be that scared of it when using only bodyweight.  Get down low to perform this mobility drill. Your back may not be flat as a board, but focus on working your way down into a deeper, taller bottom position with the heels down. It’ll come.

The VMO squat (also known as the 1.5 rep squat) is a fantastic way to make a squat pattern stronger – and these can be done with the weight loaded on the front or the back of the body. As you’ll see through the video below, the sections I wrote above are so important because a full range squat is a definite prerequisite to performing these properly and well.

The science behind VMO squats is simple: Since the knees flex more than the hips in a typical squat, it allows the quads to get involved in a big way. If a lifter has weaker quads, then optimizing their involvement can come from doubling up on the part of the squat where they’re most involved. That would be the bottom end range where the knees are flexed the deepest.

With that said, squatting down to full range and then coming up only to the halfway point hits the quads hard, while discouraging the glutes and hamstrings to get fully involved (their involvement will usually come to extend the hips from around the halfway point and up). In theory, returning to the bottom position before finally ascending to the top gives the quads twice the work for every rep, compared to their synergists.

This is a smart way to make lighter loads create the same training effect, while serving a greater purpose than just moving weight.  A lifter who’s fresh to new ranges of motion can also benefit from the decreased load and get comfortable in a deep squat position more gradually. Trust me – it’ll be helpful.

How to Do Squats: A Step by Step Guide

The Best Bodyweight Leg Exercises and Workouts for Strength

How to Squat When You’re a Big Boy