A Brief Lesson In Troll Etiquette

'Cause if you're gonna be an asshat, at least be a classy one. 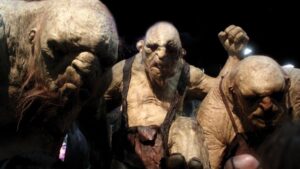 If you’ve been following my work for any appreciable period of time, you’ll know that I don’t have much tolerance for trolls. These pencil-necked languishers (whom I’m still confident spawn in locker room drain sewers) seem to find more pleasure in reading articles, not for good points, learning experiences, and content to share – rather, solely for the purpose of finding things to argue, negate, and disagree with.

We all know that the standard computer screen has magical properties that the hardware manufacturers were sure to conceal from its purchasers upon transaction day. The veil it creates to the average person to give them “power and confidence beyond what is normal” allows an average Joe to brazenly attack, contend, shame, and malign the author to a piece of work that they personally find fault with.

As a guy who gets paid to write frequently enough to make a living, I know that it helps to have a thick skin when you’re putting your opinions out there for the world to see. The more popular you get, the larger the crowd of haters will become too. It’s just the way it is. If you aren’t resilient to the knocks, you won’t make it. The way a writer or a trainer responds (or doesn’t respond) to negative feedback is important and can really be a class act.

With that said, surely we all want trolls to disappear, but that’s an impossible feat – especially since trolls are a lot like most steroid users, promiscuous ladies, or negligibly small men, in that they typically tend to vehemently deny what they’re accused of being, though the proof is usually there.

So my qualm with you, dear trolls, doesn’t come from the fact that you’re here and here to stay. I just find you’re taking your trolling to the next level – an unwelcome level that disregards basic etiquette.  If you want to be your persnickety selves, no one’s stopping you – hell, it’s a free country and we’re in the year 2014. But make sure you keep a few things in perspective.  Allow me to help you out.

You would think this goes without saying, but many people are too preoccupied with finding areas of contention to cry about and frenetically look for support from their social network minions, that they get to the ‘questionable’ areas of the author’s work and immediately stop reading, and start typing.

They may not be aware that the very area they’ve got problems with is explained more thoroughly or backed up by research, or what have you, later on in the article (Side note: Want proof of the idiocy? Refer to the Reddit archives on my most recent blog article about women lifting weights. It’s a howl). Do NOT post negative feedback on someone’s work until you’ve read the entire piece of work in question. Unless you want to be a troll, that is.

2. CHOOSE YOUR SOUNDING BOARD WISELY

Again, if you want to be “that guy”, then do your thing. It’s not my style to actively search for problems with other people’s work, and then put in the time to type about it. I know I won’t make too many friends in the industry by doing things like that, and the coaches who influence my training and writing have made it a habit of not being that way either.  To those of you who do have the free time necessary to live this lifestyle, however, it’s important to keep a few essentials in mind.

Social media is the easiest vehicle to share information fast. It’s alarming, however, seeing the liberties some will take when the actual concept of Facebook is put under the microscope. Folks with plenty of work in the public eye (like me) will often get friend requests from other coaches, enthusiasts, or professionals in the industry or in a related industry, in order to network, view updates, and generally keep abreast with the person in question.

They are REQUESTING to be friends.

That means that the requested person is choosing to accept you to enter his social circle. Without sounding like a jerk, they really don’t have to do that. Let’s face it – when you get down to it, you two don’t know each other, and have never met in person.

When your friend request is accepted and you’re ready to troll one of his or her posts, the least you can do is troll it in the comments section of the actual link. If it’s a lengthy disagreement, send a private inbox message.  Putting negativity up on someone’s personal wall is just asking for a problem. Really – an author spends his time and energy in order to deliver completely freeinformation to readers, AND accepts you into his contact list, only for you to shame his work on his own page? In my opinion, that makes things personal – which fittingly brings me to my next point.

It’s like my boy Nick Tumminello said in a recent post of his: Being able to say that you’re wrong is something that should be welcomed. Correcting trains of thought based on solid foundation shows an open mind and demonstrates an eagerness to learn (and stick to) truths in the training world. It keeps a trainer on his game. I personally encourage negative feedback just as much –or more – than positive feedback, as long as the opinions are substantiated.  But it’s one thing for a troll to post a comment on someone’s work that expresses how much he disagrees with one, two, or even several points of the article, video, or what have you.  It’s quite another to start taking shots at that person (“this guy’s a complete douchebag. I’ll never listen to anything he says. It’s shameful that any place would publish this crap. What a terrible coach” etc.) especially if it’s on his personal mediums.

In the mere 5 years I’ve spent as a paid writer, I’ve seen trolls at their worst. One well respected coach whose work I enjoy, even caught some trolling heat from people bold enough to judgementally comment on his wife – on the man’s own Facebook page.  Where does it stop?

I’ll restate my focus: Respectfully disagreeing is NOT the same as being a troll, as I describe them above. Trolls have developed this nickname and reputation as a result of their actions, and no one else’s.  It could be a collection of people who are just plain “wired” that way – namely, to scrutinize for scrutiny’s sake, “outsmart” the professional, and even libel – all in hopes of feeling better about themselves through external validation via “likes” or retweets.

I haven’t met a professional writer (at least a remotely successful one) who doubles as a troll, and something tells me I won’t anytime soon.

But for the trolls out there reading this: You’ve got the green light to be an asshat for no reason.  Just do it with some class!

Got a problem with what you’re reading now?

Why not troll me in the comments section?