Because chances are, you did it to yourself. 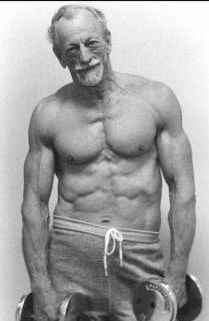 I sat down and made my breakfast order at my go-to greasy spoon diner.

It was probably about 10:30 in the morning which, for me, feels more like the early afternoon – But I’ll take an early start over a late finish any day of the week.

At 10:30AM, it’s typical for the crowd to be an older one. Much older. Any young gunners order their meals to go so they can get back to their 9 to 5’s. Staying in the diner to sit down and eat at 10:30 in the morning is for the retirees. And me.

I’ve been going to this place for so long now that when I order half a dozen eggs, no one bats an eye or loses their false teeth anymore. No one still asks me if I play CFL ball, and no one asks me “why not” when I answer “no” to the first question.  Any novelties have worn off.  But the truth is, at the beginning, them seeing a relatively in-shape person doing relatively-in-shape-people-things (like eating more than 2 eggs for breakfast) was such a foreign sight to them.  When they reminisce about how fit they were when they were younger, it seemed more like a persuasion tactic than anything else – simply because they’re so far from it now.

A few years ago, as I was at the diner taking this scene in for one of the first times, I promised myself that I was never going to end up like that – namely, needing 10 full seconds to get out of my chair only to take a labored (possibly assisted) walk over to the counter to pay my bill. Many people I’ve spoken to on the topic scoff at my 20 – something logic, telling me to “wait and see”. Getting frail, slow, and in pain in your old age is everyone’s eventuality, and there’s nothing I can do about it. A cane or walker will be a go-to, standing up straight and tall will be out of the question, and holding on to your health won’t be a simple task.  But the naysayers are wrong, and that’s why I’m writing this.

One positive about the ads for the new silly infomercial fitness apparatus, or the destructive training sessions that make up CrossFit or other “challenges”, is the fact that despite spreading the wrong messages about fitness, they raise awareness to those watching that becoming fit or staying fit should be viewed as important.  That’s more than can be said about ads and propaganda in the 1970’s or 80’s. This generation is at a bit more of an advantage than the previous one because of this.

Comfort for the Depressed Soul

To those who have feared old age based on frailty being their eventuality, for a second, it’s worthwhile to think about the amount of effort it takes to allow yourself to become unfit.

Really.  It takes effort. The energy levels associated with being young, coupled with physiology working in your favour in the form of a fast metabolism, fat-free body, good flexibility, and other attributes of health begin to wane as age sets in – and that’s when “old age catches up to you”.  Now consider an 85 year old man or woman who can’t stand tall or move freely.  `He may have been quite the athlete in his 20’s. Then he entered the work force. That relative fitness may have sustained itself until the early or mid 30’s, despite the fact that fitness endeavors of any sort occupied much less of his time than before. Then comes more work, a family, and general negligence for the next 50 years.

Going for a run once a week won’t offset 43,000 horrible meals and 60 years of not taking your health and fitness seriously.  And the net result is the picture I painted in my diner setting – being as decrepit as the Wicked Witch of the West. Except in reality there’s no magic broom to fly around on to spare the inconvenience of a pain-riddled slow walk from A to B.  Those aren’t the bodies of people who just plain ‘got old’.

And by the way, I’m not talking cancer, and I’m not talking being able to long jump 7 metres. On the most general level, there’s no reason why older bodies shouldn’t still be able to freely move. Putting your hands over your head, or crouching down to see eye to eye with a grandchild, or bending down to pick up something you dropped on the ground shouldn’t be ordeals. Ever.

I strongly believe it just depends on what you put into it now – from early on, before you have to play “catch up” with yourself after you’ve let yourself go.  But what I’m saying right now should be taken with a grain of salt. The seniors who need hip and knee replacements, who deal with chronic pain, and who now have rounded backs and brittle bones and joints may indeed have stayed active their entire lives – taking aforementioned runs regularly, playing sports, and even going to the gym . The problem is they’ve been spending years reinforcing hurtful actions onto their bodies. The problem isn’t the fact that they’re old. As a matter of fact, let’s make this a subheading.

YOU HURT BECAUSE YOU’RE WEAK

Strength training, as we know, has been tremendously underrated since the beginning of exercise. Unfortunately, it’s been much to the demise of the Baby Boomers, who are now dealing with the effects of not having practiced training for strength for most, if not all of their lives. The act of avoiding strength training is the real reason the ailments I mentioned above make themselves manifest in older populations. Ailments like joint pain, inflexibility, poor posture, immobility, labored movement, and susceptibility to injury all have the common denominator that weak bones and muscles will catalyze their likelihood. There’s no other way to say this. People need to get away from the idea that exercising with weights only affects their outward appearance. It’s an absolute necessity for sustained health and functionality. Playing sports or running don’t stack up because a) the muscles and bones aren’t faced with a resistance, meaning they won’t be challenged to get stronger as they mature b) both running and sports often involve repetition of the same movement or limited group of movements, which can cause new muscle imbalances or make existing ones worse.  With a  basis of strength training present, both of these pursuits are perfectly fine – but on their own they could end up doing more harm than good when it comes to long term health of the body.

Too many times, the old folks are encouraged to get out and do something – stay active to stay healthy and sharp. The intention is good, but the specificity is low. More emphasis needs to be put on maintaining strength to avoid running into physical limitations down the road.  I can’t speak for the folks already experiencing these problems.  But for the ones reading this who still have lots of time ahead, remember that what happens now affects the future. Spending the last 25 or 30 years of life in pain and progressively less functional isn’t something I’d sign up for – and it doesn’t have to be something we have to expect either. Unless we want to train like fools.

Do the right thing.  Don’t let your body retire before you do.