You sure as heck don't like when we prescribe meds.

Time and again, the internet defends its spot atop the throne as the primary haven for misinformation, and a way for the insecure to find hubris located neatly behind a flip screen.

Beyond the reach it has for spreading good information, it also dictates the zeitgeist for 2018 – one, in my opinion, made up of a self-help shock culture that mistakes everyone for an expert.

In unregulated industries like mine, it doesn’t take much to become a professional and help someone make sense of the whole exercise thing. With that said, that reality creates a double edged sword. On the one side, it makes for a catalyst for an earnest-minded individual to get into a fulfilling industry and start helping people. On the other hand, it can make for its fair share of disrespect, since a doctorate isn’t a required prerequisite.

There aren’t too many industries possessing these characteristics. The by-product is often that of  a clientele who can look down their noses and scoff at just how important seeking professional help could be. When someone finds themselves in legal trouble, has a dental emergency, or has a sick pet, the attitude of “I’ve got this” doesn’t tend to take over as readily as when the issue pertains to personal fitness.

We don’t wear ties, we aren’t too old, many of us didn’t go to school, and Instagram and Snapchat are driving forces to propel our industry. It’s understandable that Cody the level 1 personal trainer may not be viewed in the same professional light as the senior partners at Deloitte.

But that doesn’t mean we don’t provide a valuable service. Moreover, it doesn’t discount the fact that it’s a service that we know the most about.

“My Doctor Told me to Never Lift Again.”

More than once in my career, I’ve been faced with this statement from an ambivalent client who’s fresh off of an injury or ailment.  And each time, I didn’t know how to respond. The age-old war that we as personal trainers fight with medical practitioners is one we often lose, due to the assumed stance of authority that that “doctor” stamp adds to the mix.  Until things change, this will continue to be an issue. 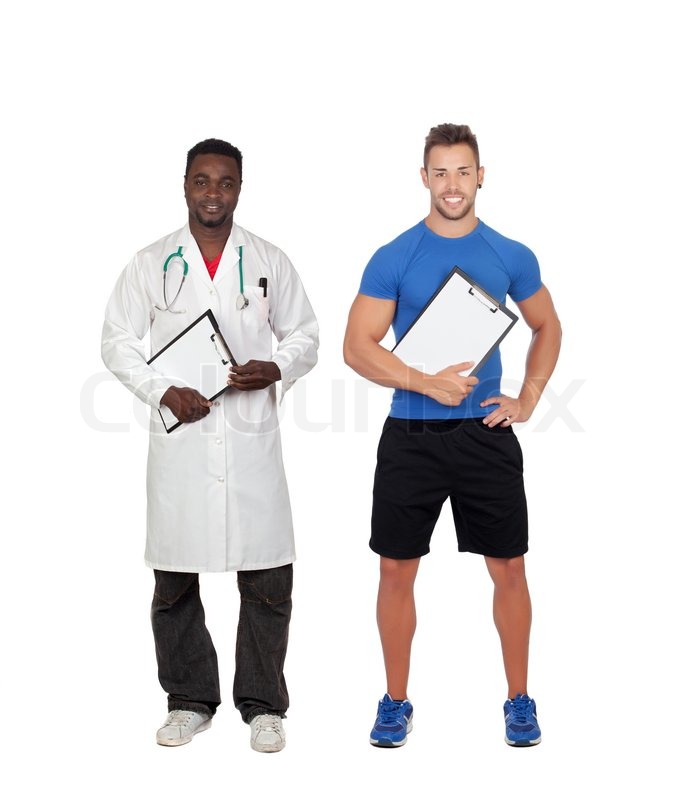 The irony about this is, if there are any two professions that should work hand in hand with one another and have a good tandem relationship, it should be the personal training and medical industries. But time and again, one industry oversteps its bounds by way of doling out professional advice that’s best handled by the other.  At best, the result is discord amongst the professionals of both industries, and a game of broken telephone for the poor client stuck in the middle. At worst, it’s a diminished perception of personal trainers, their intentions, their credibility, and their necessity – since more often than not, the docs are the ones who will receive the benefit of the doubt.

You Hate when We Do it!

When a coach with no other professional training starts diagnosing injuries, sicknesses or ailments, and recommending specific habit changes, supplements or even medicine for clients, relying on nothing but the impressive credential of a three day course, it rightfully sets the medical industry ablaze. No wonder our industry gets lampooned in television, movies and basically any other outside-in perspective.

What’s worse: making conclusions, assumptions, or giving directives based on a combination of insufficient information and a lack of knowledge creates the perfect platform for leading a paying client down the wrong path, and making everything more difficult for everyone.

Needless to say this is a two way street. So when we see studies or reports that look like this: 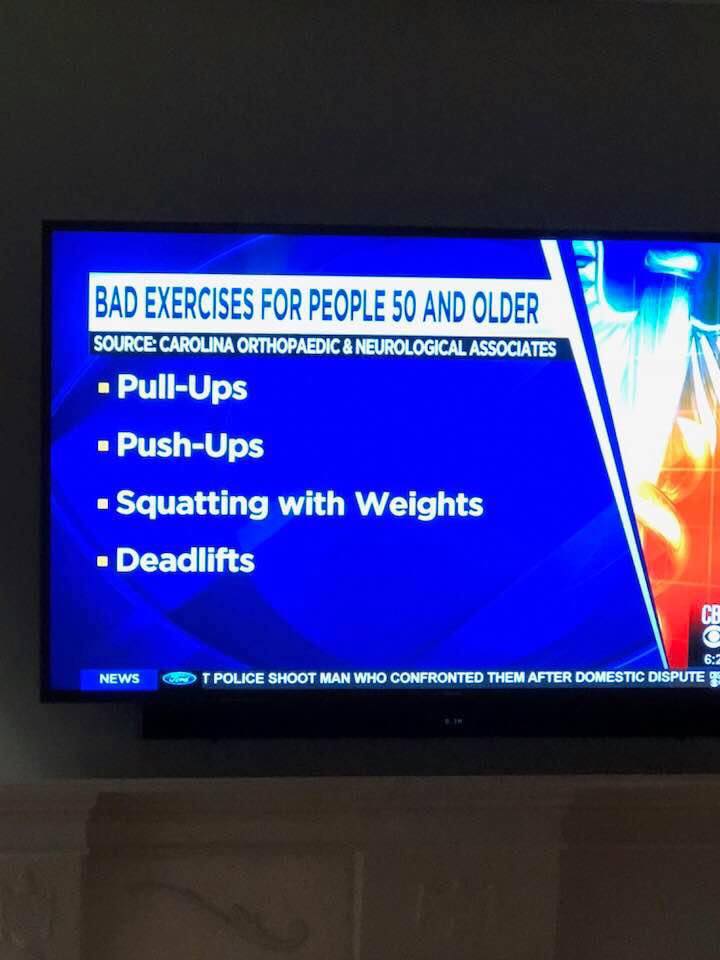 It will without question become the newest topic of outrage on an already brazen-faced internet festooned with keyboard warriors.

I understand that television is television, and popular media is popular media. It’ll always be a cash cow for hot-button topics to be touched on in a very marketable way for the sake of views, hits, and staying relevant. It’s business.  But misinformation like this wouldn’t be spread if both medical professionals and trainers had the same things to say about it.

I didn’t think I’d have to say this, but alas. The image above lists four very primal movement patterns as dangerous for lifters over the age of 50.  It doesn’t make stipulations about loading or rep ranges, nor list any potential contraindications that would make these movements conditionally bad choices.  It simply states that they’ll magically take away from your health once you surpass your 50th birthday.

As laughable as this is, let me quickly run through a more realistic breakdown.

There’s no such thing as a “bad exercise”. And it’s unfair to say that just because someone’s older, he’s no longer fit for a certain movement. Things don’t work that way. People develop muscle imbalances, injuries, and chronic pain through misuse of their body, and that doesn’t speak for all of the people who played it safe, nor the people who’ve started practicing good technique before it was too late.

Rule 2: Strength Training is the Most Important Pursuit of Fitness in Older Populations

This goes without saying. Among many other benefits, it improves neural function, maintains muscle mass (which drops like a rock in older age populations), and increases bone density, which may be the most important of all. Applying forces against resistance is a basic need, and practicing doing so using primal movement patterns like pushes, pulls, squats, and hinges only sets an older age individual up for better quality movement and functionality for the remainder of life.

Believe it from a generalist who’s quick to say that this is an industry of inference, suggestion, and nothing finite: The rules I’ve listed above are undoubtable.

Maybe this subject is close to home for me since I train a good number of middle aged and senior clients, and have also spent part of my career working for an esteemed medical clinic.  Both of those create the stage to be less than pleased with a medical authority essentially stating that weight training in what’s nearly its most basic form is inherently dangerous.  It behooves members of each community to stay in our respective lanes, while respectfully outsourcing where necessary. There’s no shame in referring to someone more qualified for the nature of the issue at hand.

Trainers: That means not trying to be something you aren’t. Even if you’re a brilliant coach, you never went to medical school, and shouldn’t be diagnosing ailments, injuries, or meds.

Doctors: If an ego check is what’s necessary, then have at it.  A coach may have spent much less time in class than you, but 9 times out of 10, if he’s credible, experienced, and good at what he does, he is still much more versed than you where training-specific information is concerned. In my opinion, giving exercise advice requires a combination of theoretical skill, client experience, and personal use. Chances are, you can’t tick all three of those boxes without being in the game yourself.

If you haven’t guessed it by now, there are culprits on both sides of the coin. I simply think doctors and medical professionals have the potential for greater impact by making change. Why? First, Because they’re a bigger industry; more people request and rely on their services. Second, the medical profession will always be looked at in a slightly higher regard than the fitness profession – and that’s just the way it will always be.

Knowing how the body works doesn’t necessarily mean you know how to train it – just like simply knowing your rights won’t pass you the bar.

In each case, the only credibility it can put into question, is your own. 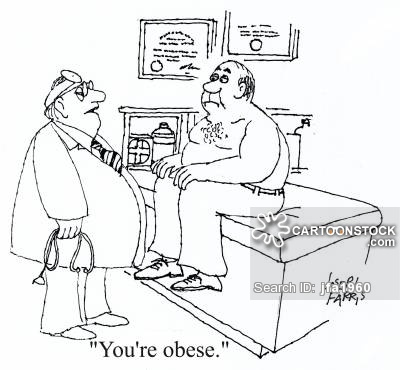