Everyone Needs To Stop Tricking Themselves And Lift Something 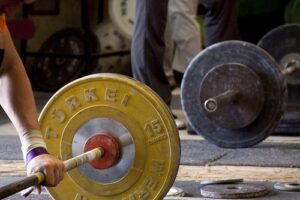 Or maybe Western society has become so steeped in superficiality that anything goes these days to look the part – you know, except for actually working for it.

It’s not like we haven’t heard this before.  Trainers have a place in the workforce because part of our job is to motivate someone to do something that they likely couldn’t achieve solo. It’s only natural for me to continue to push the reality that getting good results takes serious amounts of effort.

But I think this time, it’s actually needed. My last topic spoke about the fat acceptance movement, and how it’s essentially leading to the demise of a healthy society. On a similar wavelength, we happen to be living in the most technologically advanced time we possibly could be. Products, services and applications are being designed day after day that have a denominating factor of making life easier.

Easier. Like, less work for us, and more for the machine. It’s only a matter of time before the first self- driven cars hit the streets.  All the “back in my day” conversations I’ve had with my parents and grandparents have begun to hit home when I look around at stuff today.

I’m not saying we all need to drop what we’re doing, grab our spears, and go hunting for our high-protein dinner tonight.  As a matter of fact, it’s good if we keep this centralized around what I’m half decent at talking about – fitness.

Gimmicky fitness ads, infomercials and more, guarantee unheard of results in extremely short periods of time. You can reshape your body in 6 weeks by dancing with 3 pound dumbbells on a constantly quaking stage (cue scantily clad fitness model to enter the screen shot, just to ice the cake). Overlooking the fact that ads like this are cash grabs that their creators know all about, let’s shift our attention to the consumer.  They’re well intended and are hoping to get the results they seek, and trust the guarantees these “professionals” on their TV screen, or at the front of their Prancercise class, happen to be giving them out of the goodness of their own hearts (and not at all for the pursuit of profit, right?). They don’t know any better since they’re not fitness experts, so we can’t really blame them for anything.

To that last point, I call BS.

Is it wrong for me to say I think that there are people out there that know better?  The availability of basic fitness information is greater than ever, and it’s safe to assume that some myths have become largely accepted as debunked by members of the “general public”. Is it taboo for me to believe there are plenty of people actively tricking themselves into thinking their lackluster efforts at this whole “being healthy” thing will still result in the showtime body benefits they seek?

I mean, let’s be real here. Like, really real. If you spent the last 15 or so years basically ‘training and conditioning’ yourself to become fat and torpid by way of a sedentary lifestyle, booze and sugary treats, what makes you think 2 or 3 months of “exercise” (let alone the right TYPE of exercise) will make you magically return to your highschool fat percentage? It’s not reasonable. But you already knew that.

As a brief aside, this article isn’t for people who don’t have any workout goals that involve making noticeable changes to their body’s appearance or composition, or those who claim they just like to exercise to feel good about themselves and nothing else.

Second, I’m aware that life happens. A mother of 3 children may not have as much time on her plate to train as frequently per week as a young bachelor does. This post implies the people in question have already made the time to get to the gym. It’s about the choices they’ve decided to make with their workouts while they’re there. It’s a question of hard work, versus an attempt at a shortcut or “feel-good” substitute.

I’m also not saying that eating clean and resistance training (i.e. lifting weights that present an actual challenge) are the “best” means of burning fat rapidly and developing a lean physique. But hey, don’t be surprised if you get results like a lean, low-fat physique in much more of a hurry than all the other methods if you do decide to try it.

I guess I get upset that more people won’t take accountability for the reality of the situation. That being, THEY ARE LAZY.

There’s no getting around this.

Dancing to good music as a means of getting your sweat on is more enjoyable to most when compared to sprinting 80 metres, walking back, and doing it again.

Now, lifting light weights, doing biceps curls, and joining a dancercise class in the pursuit of fitness won’t have you walking out of there with no results – just to clarify. I’m sure enough time spent doing such things will result in a marginal increase in the components of health related fitness responsible for those endeavors.  Unfortunately, the “athletic” look that most of the general public tends to seek isn’t fostered by training in these ways. If it was, actual athletes and their coaches would make them the foundation of their training. And, you know, sports wouldn’t be hard.

With this in mind, it would make sense for many people to stop wilfully deceiving themselves into thinking that they’re en route to high-caliber results while practicing a system that won’t provide those results.  It’s unreasonable to expect average Joes to understand the science to it all, but it’s very reasonable to beg for some to exercise common sense.  Again, if it’s a “feel good” tactic, similar to the likes of the insecure stock who thrive off of famous quotes about relationships, life, and empowerment (but don’t even apply any of the advice at the very least), then our conversation here is redundant. If it’s real change you seek, however, then it may be worthwhile to re-evaluate your strategy.

Also, I’m not tailoring this all towards people who are already in shape. I know that a deconditioned fat person will not be as mobile, strong, agile, or aerobically able as a relatively conditioned person of average weight.  It’s about a training effect that matches a person’s abilities. A basic mobility-driven workout that may involve resistance training for a low strength threshold will probably have the same perceived levels of difficulty as an Olympic weightlifter’s workout during base training. The point of emphasis comes from progression. As long as that perceived level of difficulty remains the same as you get stronger and fitter, results will come.

Athletic people tend to train by doing athletically challenging things. If you want to be athletic, you should too.

The world is moving away from the notion that hard work over a sustained period of time is a reliable vehicle to achieving a desired outcome. Instead, it’s giving the thumbs up to corner-cuts like surgery, becoming a YouTube phenomenon, AutoTune,  and – you guessed it – even just plain accepting oneself as out of shape, unhealthy, and unchanging. Soon the term ‘overweight’ will be considered politically incorrect.

I was reading an article in Flare Magazine (don’t ask) that had to do with a “corset” that those with unflattering waistlines can walk around while wearing.  It seems to have been brought back to popularity from the 1800’s by none other than the wonderfully brilliant visionary, Kim Kardashian. Just fasten the 30 hook – and – eye attachment points while sucking in your gut, and you’ll have a false-advertisement waistline that will make the men flock and the women gawk….Until they see the real thing, that is. According to the article, the corset was good for exercise too.  The compression can encourage sweating and water loss in the area which can temporarily make your abdominal region appear smaller.

Alternatively, you can deadlift, and eat more chicken breast and broccoli on a regular basis to yield similar visual results that last longer.  But healthy living is for losers.

Folks, not only do I think these kinds of things are absolutely stupid, I also think they’re promoting the same message that the central theme of this article is attempting to fight against.  Personal trainers, strength coaches, sport coaches, and pro athletes would all be unemployed if getting into awesome shape was as simple and fun as the mass media often paints it to be. If you think about it for just a minute, I guarantee you’ll agree. No gimmicks.

At some point, you’ll have to realize that actual hard work is what will earn you great results.  Or you can settle for almost-mediocrity.  That’s perfectly fine too – as long as you stay true to yourself, and know what you’re setting yourself up for from the beginning.  ‘Strong’ is the new skinny, but maybe ‘round’ can be too.