Your Favorite Training Inspiration is Now a Cripple, and Here’s what That should Mean for You

Remember to train your glutes, 'cause that's where reality will bite you when it comes back around.

There was once a revolution that kick-started an idea. This idea revolved around a lifestyle where lifting weights and working out with a measure of purposeful intensity wasn’t necessarily the evil that it was made out to be. Fast forward to today, and we can see that that “revolutionary idea” has transformed itself into the malignity that defines many fitness approaches of current times. It doesn’t take much scouring of the internet to find motivational quotes from some “greats” that all have the same theme of relentlessness, hunger, and tenacity in their words, as if somehow all three of these characteristics are integral to having good mobility when you’re 75.

The workout game has fallen out of whack, and that’s nothing I haven’t written about before. As fitness enthusiasts, we’re coerced into setting up camp in one of many factions, which share minimal common characteristics as far as thought process is concerned. Albeit, some of these camps are worse than others – and those are the very ones worth being wary of. Somewhere along the line, being less careful about your training and less mindful of your own body have become qualifying tokens for a lifter to earn his stripes – regardless of his goals. And let’s be honest here – who can be to blame when crazy is your ticket to the top of the food chain? Let me explain.

In any walk of life, there are ways we can analyze this.  To be up front, I’m not talking about someone who just plain does pretty well for himself and is good at his job (or task). I mean real top dogs.  If you examine the habits of many people who’ve made it household for their levels of achievement at what they do, you’ll probably note a common thread of characteristics that generally transcend typical human behavior.  Kobe and Mike would shoot 1000 jumpers before the team practice even started.  CEO’s of major companies often play “weekend parent” where their families are concerned due to the demands of their work which has their allegiance above anything else.  As a trainer, I’ve personally worked with the latter, and going to the office at 3:30AM to get more work done during a “restless night” was a frequent occurrence.

Say what you will about my personal license to define normalcy. There’s stuff people do, and stuff people don’t. Like getting out of bed on 30 minutes rest to head to work instead of… you know… trying to sleep.  The reason these people are where they are is because they broke the mould.

Let’s take this thinking and extract the good from it when it comes to fitness. The 4-time Mr. Universe, or Olympic athlete who’s won multiple gold medals can definitely have a positive effect on a sedentary person who’s looking for motivation to get in shape. In that respect, it’s a great example for people to get in gear and start taking their health more seriously.

For the percentage of people who are already in shape, however, it doesn’t take much for the message to get lost, and for any balance between the “monumental” importance of your next PR as a recreational trainee, and the fact that you also intend to keep your job, family, social life, and most importantly your brain intact, to become skewed to no end.

There’s no question that working out with purpose, working out hard, and not cutting corners should be the baseline for virtually anyone’s training endeavors. Settling for mediocrity is not what I’m implying; I’m simply taking a closer look at the deterring factors of chasing the elite.  It’s easy to overlook the fact that there may be psychological impurities in those same elite who inspire and motivate others to do the same thing, no matter how well-meaning they intend their message to be.  If the person on the receiving end doesn’t already share a modicum of this mentality to begin with, it may be forcing him to falsely “create” it. That’s not good, and the result could be the hundreds of thousands of maimed copycats we see hobbling around North America who have already fallen down the same rabbit hole.

Should have used Light Weight, Baby!

In the world of bodybuilding training, one of the biggest motivators in this generation has irrefutably been Ronnie Coleman. The guy’s won the coveted title of Mr. Olympia 8 times.  He made it clear through his training that there are definitely no shortcuts if you want to achieve the results that he has. Just like anything however, the constant wear and tear on his joints due to repetitively heavy lifting and possibly disregarding the body’s need for recovery and other forms of training have caught up to him over the course of his career – To the tune of 7 major surgeries.

When I see or hear people in the gym somehow pulling off the notion of making a scene out of being focused, complete with excessively heavy breathing pre-set, yelling out another person’s quotes, and beating themselves (and each other) to the point where there definitely will be bruises – all to do one working set – at first I laugh to myself. Half of these guys are caught up in a culture that will only last a short phase. The other half may have a bit more allegiance, and will propagate similar thinking around the fitness world.  All of a sudden it’s common thinking that you’re not the real deal if you’re not seeing spots at the end of your training set, or passing some blood during your bathroom break.

Does it take a double hip replacement and six other surgeries by the young age of 50 to snap people out of this catatonia?  Evidently not.

In fact, to many, it just reinforces the credence that this is what they should be doing.  What are usually perceived as bad consequences become adjusted into well-earned “battle scars” that wouldn’t be traded for the world.  In fact, following his latest surgery, Coleman essentially listed not training even harder as his only regret.  Grandiose, but let’s be real here – The decision to follow the course and path of someone who clearly displays signs of obsession is something that should be exercised at one’s own risk. You can still be a bodybuilder, or an athlete, or a powerlifter, or an Olympic lifter or even a recreational lifter while applying a healthy mindset to your training and fitness that still keeps your own wellness as priority.

In my opinion, when you’ve decided to take the turn into making your training efforts prep you for competition of any sort, your foot should always be on the gas pedal.  But that doesn’t mean that you should always be flooring that pedal.  Doing so just blurs the scenery literally and figuratively, making it hard to even recognize the reach of the effects and how it contrasts outside life.

What are YOU Training For?

The health, and even the very lives of professional football players are often truncated thanks to a host of injuries form wear and tear, repetitive head trauma, and elevated stress. This state of affairs is becoming increasingly manifest in the lifting world too, which is a problem.  At first, the entire point of exercising with resistance was to make the body stronger, healthier, and free of injuries – but that original purpose has become perverted into the conquest and ‘hardcore’ war we see today, popularized by fitness trends and reinforced by the media.  It makes the recreational crowd think that their training endeavors are fruitless if they don’t go balls-to-wall, and it makes the competitive crowd re-examine their psychology for the worse.  In both cases, the end result can be catastrophic.

If you want to stop at nothing to achieve a certain result, and you’ve already asked yourself and answered why, then the next training you should do should be psychological in nature – simply to condition yourself for what lies ahead. 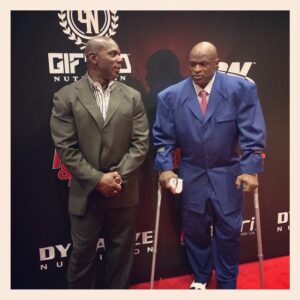