Fixing Drake’s Deadlift Until Nothing Was The Same

Drake, if you're reading this: let the haters hate; I'm here to help. 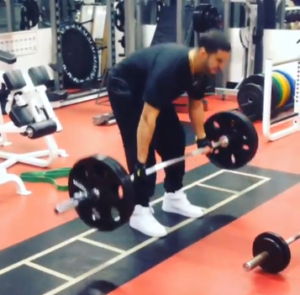 Okay. If you’re a fitness and exercise enthusiast, chances are the last couple of months haven’t gone by without you at least catching a glimpse of a short YouTube video of October’s Very Own doing some deadlifts.  Check it out below.

There’s definitely worse out there… But your form DOES need tuning up, Drake. Bigtime.

As far as work ethic goes, it looks like Drizzy Drake is living up to his hard-working reputation that he gained as an artist. Kudos for that, and keep working hard in the weight room.  There are a lot of people who are quick to hate on this guy’s deadlift form while dismissing the fact that there’s much, much worse out there. So if good ol’ Drake is reading this, just know that I give you plenty of props for training hard (which is something few people do), and choosing the deadlift (which is something even fewer people do).

Now, Drake, it’s unclear if the guy videotaping and motivating you during those work sets is also your hired strength coach, but based on what your deadlifting form looks like, for both of your sake, I’m hoping he’s not.  No doubt, it would be a good idea to take a step back to review your deads, and that’s what the point of this post is.  In fashionable timing as you’ve just released a new album (to which I’ll include several homages for good measure), your stardom is on its A-Game.  We may as well make sure you’re lifting like a boss in the gym while you’re at it.  Let’s get things started from the bottom, mmmkay?

It’s true, Drizzy, you’re working hard with that iron. As I mentioned earlier, that’s definitely commendable. In the video it appears like you’re lifting 225 for reps, and then moving up to 275 in a later set.  That’s no doubt above your bodyweight, so you’ve got a foundation for some good strength! It’s important to remember that form and technique has to come as the precursor to increasing the load.  With good form, you’ll be able to have better leverage over the weight you’re lifting too.  Your first step to improving your deadlift strength will probably come from turning things back a notch and getting your beginning form picture perfect.

If it takes going down to 185 for the same number of reps to duplicate starting geometry that looks like the image below, then have at it.

Also, from what I see, you’re starting out with the bar too far away from your shins. With heavy loads, that can create plenty of shearing forces on your lower back, which is no picnic and can lead to injury.  Step in close so that the bar almost touches your shins. Bring that stance in a bit so that it’s narrower, bring the hands in a bit so they’re narrower too, and finally, lose the Nike Air Force Ones! You’ll want a solid foot contact with the floor via your bare feet, socks, or a very minimalistic shoe (like a pair of Chuck Taylors) to encourage a proper pull that activates the right muscles.

If you don’t get what I’ve been trying to say in the past 3 paragraphs, I’ve got it all summed up in a video here:

So you’ve taken a few pounds off the bar, and gotten your setup down pat. Now all you’ve got to do is pick it up. Right?

Unfortunately it’s not that simple.

See, Drake, the deadlift itself requires a few things to happen in order for the back, glutes, and hamstrings to be doing their fair share.  I suggest you practice two things outside of deadlifting in order to get the pattern right. The first would be nothing more than a classic glute bridge. Lie on your back, plant your feet about hip width apart, and squeeze your butt you bring your hips up as high as you can. Simple enough.

The second is the hinge pattern. Your body should “fold” with the hips as the only folding point, while maintaining a straight back. I’ll typically use a dowel or broomstick held behind the back, and have clients perform squat and deadlift patterns unloaded while maintaining the adequate points of contact on the dowel.

The basic hip hinge. The head, upper back and butt remain in contact with the dowel the whole time.

Learning this pattern will not only ensure that you’re pulling the bar properly from the ground, but also make your finishing position stronger. In all of your reps in the video, you’re simply not standing up straight – and allowing the bar to “pull you down”.  Long story short, if you don’t squeeze your butt and fix up the spine, your back will be doing all the work – until it gets mangled, that is.

With the intensity you’re showing, it doesn’t seem like there are any issues you have with going hard in the weight room. But the road to strength and muscle isn’t a quick route. It takes plenty of time, discipline and practice. It also takes the humility to know when to scale things back and train your body right. Reinforcing poor movement patterns won’t help anyone long term, and a temporary ego boost today will just be bruised later when you’re injured.  It makes sense to take the steps to long term health and fitness sooner rather than later.

The confidence factor brings me to my next point – and I’ve seen this a million times with both my personal clients and random gym goers.  “Winding up” before pulling a heavy load (see the way you were “jerking” the bar off the ground when you were pulling 275?) is the exact recipe for losing your tightness at the beginning of, and by extension, through the rest of the lift.  To show the difference, I’ll contrast the 2 reps you did at 275 with 2 reps of my own at 470:

Tightness is the key!

As you can see, I get tight between reps, and I don’t bend my elbows before pulling. That’s the key. Having no “wind-up” ensures that your upper back stays tight and your chest stays up as high as possible.

From one Toronto boy to another – I’d be happy to work with you in person to improve your lifts, and help you get swole, if strength and muscle are what you’re after. You’ll surely notice the difference training with good technique makes, during and after your workouts.  Feel free to contact me if you’ve given this a read, and if you don’t reach out – please, at the very least, take these tips to heart and put them to practice in your own workouts. The future of your back depends on it! And you can thank me later.