Get Off Social Media. Get in the Gym.

And get over the irony of the fact that you probably found this article on Facebook.

For the adults who still have a modicum of original thought left, an objective look back over the last 15 or so years may confirm that social media in its many forms has done just as much to divide society as it has to unify it.

That’s a bold ice-breaker, but it’s true.  The amount of armchair hubris the act of hiding behind a screen can create leads to the opportunity for daily e-wars and thought-bullying for anyone who’s up to play the game.

Sadly, for many, it’s become an inescapable paracosm-turned-reality.  Moreover, all views on life, politics, culture, and society are shaped by those of the popular person who posted their own views on such matters first.  We all know a few people who are caught up in the matrix – and if we don’t, chances are, we’re those people.  Ripping ourselves away from the vines, tweets, debates, and “challenges” that add absolutely nothing to our lives exposes a vulnerable side to humanity that I suspect such immersions into a virtual world only attempt to hide.

Parallel this with an industry – and possibly a lifestyle – that’s been steeped in nothing other than more superficiality, egocentricity, closed-mindedness and a whole lot of testosterone, and we’ve created a cocktail with disaster as its prime ingredient.  It’s a mindset that has given many otherwise unqualified individuals a chance to turn over a profit by way of online training, video blogging or product sales that can reinforce the same state of existence to those less informed.

Whether you’re someone who just likes to lift, or someone who does this for a living, it’s pretty important to realize that too much time in the social media labyrinth can distort natural human thinking. And it can do so in a fairly major way.

I feel the way I figure parents to a teenage daughter would feel the first time they noticed their little girl trying to look cute for school. The amount of “bad influences” that permeates the worldwide web can truly corrupt an impressionable mind; one that might be relatively new to training.  In gym life, what started out as the desire to get in better shape, build confidence, and improve athleticism, can become bastardized into something that only serves as a facilitator to more insecure behavior.  And that’s not where it stops. This isn’t confined to cosmetic fitness goals.  When you really take the time to stop and think about feats of “strength” as someone who doesn’t take part in the organized competition of those very feats, beyond a certain point it can at its core become very petty.  The average person can do nothing with the knowledge that he can lift hundreds of pounds, other than grab a camera and show that to everyone else.

It’s a great big monkey see-monkey do.  People start training more for the sake of the posts, and less for the sake of actual enjoyment, let alone a regard for their health and wellness.

And don’t get me started about the idea that this behavior can be “motivating” to others. Though it may be helpful every now and again, I simply don’t believe that a scantily clad bathroom selfie, or a hardcore lifting video complete with chalk, blood and ammonia caps can serve as the defining factor as to what renews an unfit person’s resolve to hit the weight room.  And if seeing these things every time you flip your laptop open is what gets your wheels turning, your long term physical and mental health may benefit from a deeper self-examination.

Gym culture has changed a lot from what it used to be. A lack of access to the constant feed of each other’s whereabouts, thoughts, meals, and goings on is what allowed people to focus on training for more, dare I say, wholesome pursuits, and not just to have material to appease their “followers”.  I often wonder how full gyms would be if no cellular devices were allowed past the entrance. 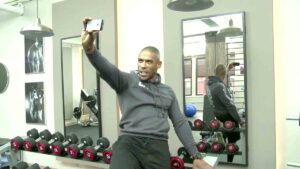 See, there’s a big difference between training for maintenance and training towards a specific (and often ambitious) goal.  Hardgainers may not be seeing the results they seek because of how preoccupied their minds can be on things that aren’t related to their training.  Being inspired by the big guy who does a deadlift ladder, or overly concerned with perfecting the weight room Mannequin challenge or getting the right mirror shot for your Instagram feed and Facebook cover photo in no way enhances your training. And people were doing just fine before these things came along.

Before you jump to conclusions, I’ll say this: The dissonance I might seem to be claiming to own is more of a dissonance I aspire to achieve. If I didn’t use social media for work related purposes, I probably wouldn’t have it at all.  I’ll make a video post of a lifting PR, or a good work set every now and then, and when I do, I usually try to keep a fair purpose and reason behind doing so.  I’m not the sentimental type, but even I can see how luring a wave of vapid positive reinforcement can be once I make a post or update my profile photo. I’m not immune to it, though possibly more resistant than many others I know.  One thing that I do know for sure is that there’s a problem present, that none of us is acknowledging.

Remember when I said that social media is as divisive as it is unifying? Here’s the case in point.

As coaches, we fit ourselves into the social media community and promote what we do in various ways. The resultant countless and often time-wasting arguments that occur online between two or more die-hard promoters of their own respective style of training could easily be quelled if each party spent more time gaining practical experience – and I don’t only mean working with clients.

The act of physically working out can tell a coach a whole lot about a program, a training effect and response to workouts, and can also be instrumental in building his own philosophy and rationale. On a completely unrelated note, I’ve noticed that the people who often spend the most time bickering on social media aren’t simultaneously the ones with the most impressive physiques, lifting numbers, or industry accomplishments.   The angry strength and conditioning specialist puts his dukes up against the half-naked gimmicky program pusher, and the functional training zealot, rehab practitioner, CrossFit proselyte, and primal lifting purist join in the debate. Everyone is right, everyone’s the best, and everyone is sure.  Add that to the inevitable personality change that comes with not having to argue face to face, and it makes for very rare instances where the terms “respectfully disagree”, “healthy debate”, and “politely intervene” are actually honored.  It’s been years now, and few people have realized that 90 percent of it gets the industry absolutely nowhere as far as its actual progression is concerned.

A coach who was once on a good track regarding building his philosophy, keeping clients safe, taking in solid information and getting people results, has now voluntarily exposed himself to an onslaught of callously opinionated alternate views that can distract him from his original ideas.  Don’t get me wrong – sometimes that can be a good thing.  Everyone can stand to learn from others, and keeping up with information from other respected coaches is essential.  But getting caught up in an e-debate where there’s relative validity in all perspectives usually becomes exhausting, and even destructive.  Depending on how explosive things get, it can also take away from credibility as a coach, and as an overall professional.

Know what doesn’t?  Getting in the gym and training for your stripes.  I’ll always believe that that’s a form of credential that most people don’t give enough of their respect.

I’ll never believe that things “just slip out” on social media. Posting vitriol aimed at another coach’s thoughts, opinions or articles is a four step process. First, the writer has to think of what to say. Then they have to type that thought out. Then they read it over, and finally click the button for it to be posted.  All of that means it’s just 4 steps easier to move on with your day. Skipping out on one twitter argument won’t be the difference between the industry’s success and its demise.

See, the common thread between both of the above subheadings is one of self-centeredness.  Possible insecurities aside, the preoccupied lifters caught in the social media matrix from my first section are focused on garnering likes and attention from their followings.  Avoiding this doesn’t negatively affect their gains or the lives of the people who follow them. If it’s not too late, it doesn’t negatively affect their psychological stability either.  But there’s no mistaking this: It’s 10% about motivating and inspiring others, and 90% about how doing this makes them feel about themselves.  That’s why “getting the right shot” is a thing. It’s also why the ‘like’ button exists, and why there’s room for people to comment below each post.

The angry fitness coaches from my second section usually don’t seek resolution; they seek concession. What matters more than anything is actually winning the argument, which does nothing but bolster the ego of that single coach.  If that coach was actually interested in making the industry better, making clients better enlightened, or making other coaches stronger at their craft, he’d likely take action that transcends a thread. That could be by way of reaching out with a direct personal message, an article, an instructional video, or some other positive contribution to the industry. As I’ve said before, the combination of small voices spreading the right messages is what will outweigh the present influx of misinformation.  Taking action to make sustainable change requires a different approach than the masses will take. It takes a professional to make a professional.

The Gym – The Anitquated Remedy

When you mind your own business and train often, you see gains faster. You also notice what methods work for you, and what methods don’t.  People on the internet can argue and argue whether chin ups or hammer curls are the best biceps developers in the weight room, but that won’t change things for the guy whose biceps just plain explode only when the calf raise movement is present in his routine.

My point is this: In an industry where nothing can be proven, anecdote trumps everything. Maybe internet trolls are skinny and weak because they’re too angry and argumentative. And maybe they’re angry and argumentative because they’re skinny and weak.  And truthfully, a lot about training is supposed to be selfish: You’re doing it for yourself, and often by yourself. The second other people’s perception of you or your methods comes into play in a less than productive way, the message gets lost – usually hand in hand with your gains.

If you’re a professional trainer or just an exercise hobbyist, it provides a world of benefit for your physical and mental health if before each social media post you make, electronic debate you enter, personal grievance you share, viral video you spread, selfie you upload, or training “challenge” you accept, you asked one simple question first:

Without your phone nearby, find a mirror, look at your eyes, and answer.