..And banished from society, never to show my face again. 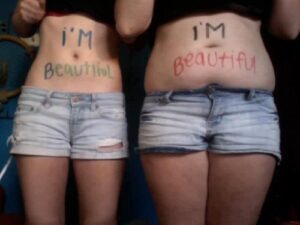 The internet is powerful. Really.

Different trends on the ‘net and popular culture in general, can really be a spawn for plenty of practiced psychological behavior whether it be a product of insecurity, rebellion, or just plain validation. Walk down the “Annex” of Toronto and you’ll hear plenty of the savvy jargon enter the vernacular of the typical 20-something.

Hey, we’re children of the times, so it’s all good. We can’t be speaking 16th century Elizabethan forever. But when it comes to pop culture, there’s been a lot in the past 30 or so years that has glamorized images that have since become the “norm” or ideal for one to be deemed attractive or worth attention. It takes just one celebrity to mention something amazing about unhealthy “thigh gap” to make a world of impressionable youngsters and ill-informed mature ones strive for the same thing.

And let’s not forget the social media debacle that ensued as a result of this instagram picture:

We’ve been spiraling downward into a morass of skewed ideals formed around body image for too long. So it seemed (and seems) like a welcome change to see what many artists are capitalizing on these days in creating something that’s more “realistic”. In a nutshell, popular magazines, commercials, and entertainment show the classic body type as being slim, tonic, without visible flaw, and full of youth. The invention of photoshop and the airbrush has reinforced this by turning imperfect bodies into perfect ones.

In backlash to the doctoring of photos to create a new ideal, some of the above mentioned artsy creed have made articles and photo galleries publicizing the scantily clad bodies of people from more of an everyday perspective. The photos went without touch-ups, or any changes. They may have high body fat percentages, stretch marks from child birth, and may not be the height of the archetypal model. And that’s the point.

Call it “shock value”, as it were. It’s a quest to determine who set the standards on beauty, norms, and ideals. It’s a way to find true beauty through what we see around us on an everyday scale, rather than looking up to these glossy, glamorized images that are far from realistic, and striving for the same thing.

It’s a way to give people who might fall under the same or a similar category (which would easily be a majority) a shot of confidence and recognition, especially if they’re stuck living by the standards of what popular culture has created.  It’s a way to show the masses that the ads for the leading soft drink or fast food are subtly excoriating those who have a body fat percentage that’s above 15, especially by using athletes and models to down the pop, burger and fries on cam.  It’s a way to show popular culture that everyone doesn’t have a visible 6 pack, nor should they.

I think it’s a great idea and a breath of fresh air indeed.

And I think it’s a horrible idea that could put our society in cahoots.

Both at the same time.

Allow me to explain.

I’m aware that this is a touchy area. My two cents are nothing but that – my two cents.  With that said, I also realize that (unfortunately) the people to whom the body image and psychology topic tends to tip the scale towards, is women.  Hate to say it, but there’s more judgement, at least where I’m from, towards women’s body image in society. That’s just the way it is. By default, as much as I would prefer otherwise, this post will probably at times feel like it’s swaying towards the having the spotlight on the female species, just because of the above. It’ll be tough to avoid.

The “be confident with who you are” movement is finally beginning to ring through the occlusion of vehicles designed to exalt the athletic, lean, attractive stock, and inadvertently put down the stock who fit an opposing description. As I mentioned above, articles and photo galleries that show a 225 pound woman who’s confident enough to bare all for the intrawebs to see, can fortify the mind of another 225 pound woman who doesn’t feel quite as good about herself.

There’s a flip side, however.

As is the case with anything made public, there will be the few who miss the forest for the trees, misinterpret the message and misapply the counsel.  I’m a strength coach. I help people exercise and promote a healthy lifestyle for a living.  For that reason, I simply can’t go 30 seconds after viewing articles like this before my mind shifts to thoughts of the point I’m about to make next.

The feeling of empowerment and confidence that a relatively unfit or sedentary person can acquire for seeing others put themselves out there like that, can also turn into an air of complacency when it comes to taking action to become fitter.

The depression and self-guilting that I suspect can be associated with someone who’s insecure about being overweight (who’s affected by classic pop culture images and social pressures), can be as harmful to one’s health as the complacency of being so confident in oneself though terribly out of shape, that that person feels no need to exercise or “change” to “appease the public eye”, per se.  One circumstance is a bit more of a psychological consequence, whereas the other is a bit more of a physical consequence – right off the bat, anyway.

Saying, “I’m happy with who I am” can be a bit dangerous.  I’m usually not too bad with words, but in this case I simply can’t think of many other ways to put this: Those who are in poor physical fitness shouldn’t use newfound self-confidence and pride as a scapegoat to avoid the act of exercise in hopes to improve those fitness levels.  It’s easy to say that this is real life and every man won’t have a washboard stomach, and every woman won’t be a size 1 or 2. Believe me, the catatonia that exists within fitness and exercise fanatics on the other side of the spectrum is a whole other conversation. But looking past the aesthetic and into the health benefits and risks is a useful thing to do.  There’s an important difference between exercising to look good, and looking goodbecause you exercise.

The sad truth is, these movements of what “real” women (and men) look like are more accurate than what mass media portrays as the norm. But that doesn’t mean it should be completely embraced, devoid of any regard for the helathiness of the individual. Doing this just reinforces the idea that having a body type that’s out of shape presents no negative ramifications.

Again, sorry ladies, but in the strength training world, it’s no secret that you’re much more widely known than your male counterparts to have the mistaken thinking that any weight training will result in you building muscle to become ‘big and bulky’. What I’m saying is, in this particular topic, you’ve already got a couple of strikes against you – adding this (the idea of proper training methods to be something of a deterrent) to the demands of a society whose ideals are structured around the idiocy of pop culture, and we’re in a dilly of a pickle and have reinforced the idea to stay at home and sedentary that much more.

Before I go any further, I should list a couple of points for the record.

How dare a man in decent shape who helps people exercise for a living, pass off an opinionated statement to a bunch of confident, overweight women. Right?

When you talk to a guy who smokes, you’ll usually hear a litany of excuses as to why they do it, along with their nonexistent efforts they’re making to quit. Over the last number of years, the act of smoking has basically become ostracized by society in the sense of what actions public establishments have taken in their presence. Cigarette packages have risks of lung cancer accompanied by ghastly pictures of decayed teeth displayed front and centre. It’s the law. There are smoking sections of restaurants, hotels, and patios.  Night clubs no longer permit smoking indoors. Neither do workplace offices. People learned that second hand smoke, and smoking in general causes health risks. In general, society encourages smokers to quit rather than hurt themselves slowly.

Parallel that idea to the fitness industry. In the continent that has the highest obesity rate in the world, I feel that as much as we should be telling people who don’t fit society “norms” to be confident and love themselves, we should also be telling people to take their health into their own hands, that much more.

On the one hand, it may sound harsh. But there’s no disputing that the coin has two sides. Call me a fat-shamer. I’m not trying to be one.

And let’s face it. If I didn’t speak up about it, I wouldn’t be doing my job.