How To Jump As High As An NBA Player, While Doubling As A Grown-Up Who Does Big People Things

..Because chicks dig the dunk. 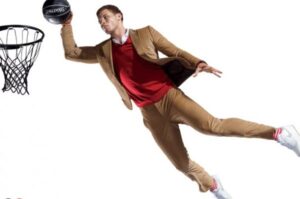 Every year I watch the Sprite Slam Dunk Contest during the NBA all-star weekend. Even though the creativity of the dunks and the contest setup itself has made a drastic nosedive since Vince Carter’s electrifying stint of the year 2000 (and I won’t evenbegin to describe this year’s debacle), what never ceases to impress me is the sheer athleticism these players display in the event.

Listen, they’ve got a lot going for them – they’re genetic freaks of nature with an abundance of God-given talent. Plus, having a 37-inch vertical coupled with a 6’8” frame isn’t a bad place to start.

Forget the whole “my friend told me that his friend told him that his cousin read a book that said black guys have an extra calf muscle” thing. That’s played out. Sure, it would help not to draw the short stick when it comes to choosing your parents – who wouldn’t want a genetic edge? But if you’re just an average Joe, and have to commence with an ungainly sprint from the other end of the basketball court in order to get your fingers to lightly graze the rim on your most productive attempt, then it may be a good idea to train the right way to become more explosive.

Over the years, there have been known products out there that can help your cause. Air Alert is the one that most readily comes to mind. Though effective, it typically works by way of a multi-step program that involves minimal weight training, and multiple days per week spent performing plyometric style exercises. And you’re not 17. You don’t have 3 months off during the summer to enjoy the hot weather, hit the park or basketball court, and go to town on your new plyo program. You work full time, hit the gym a few days per week after work, and train to get in shape. Plus, if you’re from MY neck of the woods, chances are, warm weather alone is something of a luxury in itself. It makes the most sense for you to infuse some safe, fast-twitch training into your workouts so you can kill two birds with one stone, and impress your friends at your next game of pickup ball.

I recently wrote an article for Esquire that drives my standpoint home succinctly, but I’ll restate the sentiment here: People need to understand that they’re not top-tier athletes. With that said, proper execution of simpler movements and the development of a solid foundation can do wonders to improve athleticism, which can carry over into athletic endeavours – like, say, dunking a basketball.

Think about it logically for a minute. If you’re weak in a certain athletic movement, on the one hand, you could need specific attention, but what’s much more likely is that you’re just plain weak. So it shouldn’t take brain surgery to make your body respond the way you want it to, via the right simple methods.

Disclaimer: The exercises below are indeed more geared towards the general population than the most specific variations of compound movements, plyometrics, and Olympic lifts. BUT, if you don’t have an athletic bone in your body whatsoever, you’re new to training, or you’re simply too weak to do basic movements like a set of 10 push ups, bodyweight chin ups, or properly executed back squats with at least ¾ of your body’s weight, then it’s a better idea to stick to the basics and work on getting stronger.  I can guarantee you’ll get exactly the same amount of benefits. This stuff is for a guy (or a girl) who’s past the very basic novice level training, and can hold their own in the gym.

As long as you’ve got no existing knee or hip injuries or chronic issues, performing these staple movements will have a lasting impact on you jumping for the moon.

Remember to keep the heels firmly planted on the floor, and squat to FULL depth (below parallel). Doing this will make sure all the muscles of the leg get hit, and not just the quads. Use a relatively heavy load that gets difficult by the last two reps.

Immediately following the squats, rack the weight and step out of the squat cage. Perform full depth squat-jumps, jumping as high as possible on each jump. Remember to land softly, absorbing any impact, and keep the movement flowing – not choppy.  After you’ve finished the jumps, rest for 3 minutes before repeating this pair of movements. Perfrom 4 sets.

What you just read above is an example of a contrast set. Namely, lifting heavy for a few reps, and then going through an explosive version of the same motion, with no weights. Your muscles will be “tricked” into thinking that they have to fire harder, since they were just loaded down by a heavy barbell –and it’s a great way to train your body to become more explosive.

Start with a single dumbbell held at shin level. Be sure to keep a flat back and bent knees. In one action, “jump” the weight up to a fully outstretched overhead position. Pretend someone’s standing right in front of you and you want to avoid hitting them – this will ensure the weight travels in a straight line. Also, avoid lifting the weight with your arm (using a heavier dumbbell usually gives one no choice), and let your body do the work to create the force. Check out the video to see what I mean.

The deadlift is the most important movement to learn and master, in my books. Making it strong is even more important. Having the right technique helps, and most people aren’t setting up the way they should when performing the lift.  Here’s what to think about.

The deadlift works the muscles you can’t see in the mirror, like the hamstrings, glutes, and lower and mid back. These are powerhouse muscles for developing more explosiveness – and also tend to be the most undertrained muscles on the body of the average trainee. Do them.

Keep in mind: These movements don’t need to be done all in the same workout – rather, start things off by making one of each a part of your workouts during the week. You’ll notice your general athleticism improve and your explosive power increase by way of more strength, and a higher vertical leap.

Put these gold nuggets to good use, and in 8 weeks, you just may be going from that epileptic seizure frantic rim-tap to a full-on flush.  You’ll get stronger by practicing the foundational tool exercises. Stay disciplined, avoid the fancy schmancy, and you’ll be glad you did. In highschool and university (and even now), a 34 inch vertical jump made dunking a basketball no problem at all. If I only knew how to train my muscles to get stronger the right way, chances are I’d be competing with Terrence Ross as we speak.