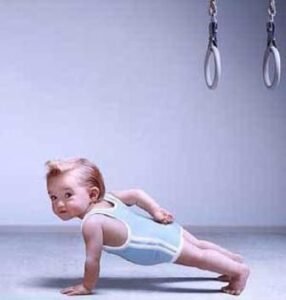 As the last 2 volumes of this series have pointed out, the primal moves are important. By extension, I’d like to add two more moves that are highly underrated, and often substituted for others.

My last article was all about the bench press. This one’s going to start with what I consider a superior alternative when it comes to shoulder health, proper movement patterns, and muscular conditioning.

Most people think it’s a piece of cake to do a push up. Set your hands just outside shoulder width apart, lower yourself to the ground, and push yourself away from it. End of story.  Unfortunately, it’s not that simple.  The perfect push up involves many functions in the muscular system to be in proper working order.

There’s a certain “rhythm” that needs to be in place for a push up to take proper effect – the rhythm between the scapulae (shoulder blades) and the humerus (your upper arm). As the arm moves, the shoulder blade should congruently move also, albeit to a lesser degree. This is the fundamental difference between the push up and the bench press exercise, since “pinning” your shoulder blades on the bench immobilizes the scapulae and disallows such rhythm to take place. Another reason why the push up is a superior movement in my books.

Priming yourself up for a proper push up, in a sense, does mimic the same setup you’ll see in a bench press. You want to pull the shoulder blades towards each other, so the chest is pushed out, in this case, towards the ground while the arms remain straight. This will ensure that as the body lowers itself to the ground, the rotator cuff remains stable enough to handle the load of your bodyweight.

A common problem I’ve noted with push ups is that the hips aren’t held high enough, so the abs and lower back don’t get enough work in the set. Using the “chest first” cue encourages the lifter to remember to make the entire body move as a unit. In a tight, bottom position of the push up, the chest should really be the only thing touching the ground, with the hips and stomach about an inch off the ground.  Keeping this in mind will make a lifter aware of whether or not his torso is moving independently from his lower body.

Push All the way Through!

This goes back to the rhythm between the scapulae and the humerus.

Remember, we want to take advantage of the fact that our shoulder blades are being allowed to move, so it’s important not to “stop short” at the end of our push up, the way we would during a bench press. It’s a good move for our shoulders’ health if we exercise full mobility of the scapulae, for what it’s worth.  Pull the shoulder blades far away from each other after you’ve fully extended your arms.  Watch the video below to see all of these cues in action. I decided to show it as a superset to a bench press, which can help you highlight the key differences between the movements:

I relate to this as the king of upper body exercises.

Surprisingly, it’s simultaneously the exercise that the greatest percentage of people can’t perform without assistance.

Simply put, if you suck at these, often times you’re leaving your most important muscles out of the picture when making a pulling effort. You’ve gotta stop lifting with your arms – you won’t get far!

Shoulders down, long neck, chest up!

All three of these cues refer to the same thing – shoulder depression. You have to get your shoulders out of your ears before you pull yourself up to the bar. Making that “prep” will engage many of the muscles of the upper and mid back, setting you up for a much stronger pull. Not alarmingly, most people who aren’t used to controlling their shoulder blades like this, have a major problem doing so when they’re dead-hanging off a bar. Check out this trick for making sure you set things up properly before performing your actual pull up:

Of course, it doesn’t mean anything extreme, but I’ve seen many resources erroneously state that the body should remain straight as a board when performing pull ups. If you think about it, that’s not even possible. As we’ve discovered, good form involves the shoulder blades moving down and back. This will make the mid back and lower back arch as a by-product. The muscles couldn’t shorten if this didn’t happen.  Just like a bench press asks for an arch for a proper, stable set up, supported by the back muscles, those same muscles are now being asked to be the prime movers. Make it a point to squeeze the chest “up and away” from the bar as you pull towards it.

Making sure the glutes, low back, and hamstrings are kept tight during pull ups will do nothing but help. Your muscles are covered in fascia, which is almost like a “wrap” that surrounds groups of muscles at once. That fascia can aid strength outputs when it’s pulled tight, and it can help muscles work synergistically. Flex the glutes hard, and really dig in so that the lats get exploited for everything they’re worth. You’ll notice your back get a more concentrated pump.

In these volumes of the “How to Move” series, we’ve gone over what I consider to be the most important movement patterns in weight training. Hopefully these points have helped clear up some uncertainties about the lifts, or have become the key to unlocking pesky stymies in progression.  Putting an end to the weak links can be as simple as one single, well timed cue.