I FINALLY Give My Take On Crossfit

It was only a matter of time... 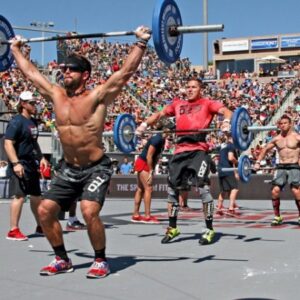 I’ve watched the wars go on and on as I simply laid back in the cut.

The age-old battle between the classic strength and conditioning world and the so-called “crossfit cult”.  I made sure not to publish any detailed opinion based articles on the topic, so as not to fuel the fire in favour of either group. Plus I figured it would take a few years for the thing to really pick up, gain true momentum, and possibly evolve from its beginnings. For the most part, that is true.  Based on what I’ve seen, it’s not the same as it started, and it’s definitely gotten bigger and bigger every year.

I’m sure you’ve heard terms like “Fran”, or “W.O.D.” among many others commonly thrown out as part of the typical crossfit vernacular. For those of us who have been living under a rock since around 2008 when this training method began to really take off, here’s an explanation. Crossfit actually got started in the early 2000’s. Again, it got huge in the later 2000’s. It comes in its most basic form as high intensity workouts that involve many large, compound barbell movements like the squat, deadlift, snatch, clean, pull up, and push press. From what I’ve seen, barbells and kettlebells are the most commonly used implements in crossfit training in the gym.

Many of the workouts use time as the variable, so the lifter is in a sense, racing the clock. A better concluding time to finish a given fixed workout equates to a stronger result.

In the last few years, I’ve noted that crossfit has done more to be all-encompassing and include more and more components of fitness. The use of field work, lifting irregular shaped objects, sprint drills, longer distance runs, gymnastic and even swimming work has become present if you watch the official Crossfit Games international competition (Now, I don’t know whether that means they’re present in the entire crossfit day-to-day training methods, but I could conclude that a modicum of these methods of training must be used for someone who aspires to compete in the annual games).  The folks at crossfit are really trying to leave no stone unturned in terms of making their athletes achieve better competency in each component of fitness.

THE GOOD, THE BAD, AND THE UGLY

I have to tip my hat to the founder of Crossfit, Greg Glassman, simply because of the fact that he’s an incredible businessman. The guy’s created a business that’s now affiliated with reebok, internationally recognized, and has really taken advantage of an online “network” within its community, where people can post their results from workouts of the day, and other workouts to compare against other lifters. He’s brought out a spirit of competition within its community that can motivate people to get fit and become more athletic than they’ve previously been.

On that note, I also like the fact that the barbell movements are often prioritized as the “hub” of crossfit’s weight training workouts. You all know how much of a proponent I am of the foundational  movements like the deadlift, squat, press, clean, and more. These moves aren’t used sparingly in crossfit, and from what I’ve seen, I’m going to go contrary to what many people say, and note that the initial base coaching for the techniques of these movements WITHIN the crossfit world, is indeed very thorough.  I actually wouldn’t argue with much in terms of the instructions for the movements. I also want to give kudos to a training system that also incorporates swimming, short and long distance running, and gymnastic training along with weight training, as a part of its entire realm. That’s something that’s unique and indeed all-encompassing. Even if you just want to get in wicked shape, the basic exercise choices made in crossfit workouts are top-notch.

THIS IS WHERE I RAISE AN EYEBROW.

That “time” variable I mentioned above can be the sole culprit for my frustrations with crossfit, and a reason why I won’t get involved with it personally, or with my clients. See, the way crossfit is set up, it’s something like making training a sport. Therefore having a measurable variable like time, allows someone to compete with others without only looking at weight lifted as the target. It’s a smart plan looking at it objectively – but in a discipline like weight training, it can encourage technique to break down (term used loosely) as fatigue begins to set in. Couple that very fatigued, technical breakdown with high reps in the biggest compound barbell movements and you’re going to be risking injury in no time.  I was recently watching a full crossfit seminar online, where the facilitator mentioned the “Most, Most, Most” approach that they use and refer to often. According to him, this meant using techniques that applied to most people, most of the time, under most circumstances. This has the potential to all go out the window when the goal is to perform a certain number of snatches, deadlifts, thrusters and pull ups in 21 minutes or less, or when you have 90 seconds to perform a 300 pound clean and jerk, with 90 seconds to recover and try again if you fail – since in both cases the circumstances are more urgent than a typical scenario training in the gym.

I simply don’t think big movements such as the Olympic lifts at any load should be used for timed high reps, and when you mix relative beginners into the stew, it stirs the pot for controversy.  There’s a grey area when you consider what the motivation is to begin workouts that mimic many crossfit style workouts. In my opinion, the very “sport” of weight training can be a blessing and curse. I’ve written about the dangers of treating workouts like conquests to prove one’s manhood or “hardcore-ness”. This would fall under the same category. When physical fitness is expected to be the focal point of training in the gym or with weights, it’s slowly shifting to what your score is (be it how much you can lift, how fast you did the “Chrissy” or “Fran” workout, and so on).

Don’t get me wrong – crossfit will get you “fit”. The systems will make you more athletic because of the movments they prioritize, you’ll shed fat due to the anaerobic nature of many of the challenges, and you’ll probably even be a bit stronger than you were when you started due to the barbell training. They’ll improve your anaerobic and aerobic thresholds, and your body will also look better. That’s why absolute beasts like Rich Froning are reigning champions of the games – But let’s put that fitness into perspective.  There aren’t people like Froning walking around all over the place, and the sad truth is – it’s a rarity to find someone with anomalous levels of athleticism like his, who can handle the intensity that many of these crossfit workouts (at least the ones I’ve seen) can provide, and recover from them adequately enough to do them over and over.

You have to consider what your end goal is. If you’re looking to train for the military, some demanding obstacle course challenge, firefighting conditioning, or the like, there’s definitely a place for crossfit-style training to enter your program structure, if you want it to. If your goal’s strictly to get “fitter” and shed body fat while building an appreciable amount of strength and muscle, I’ll be the first to say there are other, safer vehicles that can be used to achieve such goals, even if many of the movement choices are the same.

If you consider football as an example, you realize that the amounts of weight those guys have to beast up in the weight room is impressive, and the athletes look the part based on what kind of numbers they’re throwing around. But they’re doing it not for the long-term health of their bodies, rather for the benefits it will translate to them on the field where they get battered, and treat their bodies like human pinballs with all of the speed, aggressive directional changes, and contact. Just look at any one of these players when they’re 5 years out of the game. When you use and train your body for the demands of any sport, you’re usually sacrificing some aspect of your body’s health and putting that aspect on the line, whether it’s your joint stability, connective tissue strength, or bilateral balance (that one’s huge!).

When you train with weights for the “sport” of weight training, wouldn’t you expect the same sacrifices to be made, at least to some degree?

I’d have to say it’s not something I’d personally get into, nor recommend for 99 percent of my clients, but I can understand why people would get into it and become engrossed by it too. It sounds like a captivating idea, and I’m sure the feigned notion of accomplishment far surpasses that of a conventional workout, especially when coupled with the endorphine blast.

But I’ll be honest – when I see videos like this:

… I have to say that I’ll stick with my low-risk training methods to get me in shape, and also get back out to the track and field to fuel my competitive spirit. That all works just fine.