Let’s be Honest – The Body You’re Going For, Doesn’t Exist.

And you need to get your head out of the clouds.

My industry sorely lacks a dose of reality when it comes to promises it claims it can keep concerning a prospective client’s results. It doesn’t help the situation when many commercialized fitness experts make resolve to “reshape your body in 6 weeks” while oiled and nearly naked on screen.  Misleading standards of body image, what can be attained, what’s healthy, and even what should be desired (though subjective) permeates this field. It’s a shame, since at its core the point of this all is to make the body and mind healthier – but as I’ve mentioned in previous work, I believe that there are just as many forces in action that can take an earnest mind further away from that outcome. I don’t have to search Google to figure out how many articles on “loving your body” there are, or the number of legit strength coaches preaching that aspiring to look like an on-stage competitor is unhealthy and unrealistic. They’re everywhere.  Here, my intention is to actually flesh this out some. Allow me to assume you beloved readers have a modicum of common sense, and are willing to think rationally on this topic for a few minutes.

First Things First: What Does a Healthy Body Look Like?

The truth is, that question is way too subjective to answer. But on a relative sense, It may be worthwhile to think that for both men and women there are images that are socially accepted as attractive and desirable that aren’t simultaneously the most healthy to pursue. For women, a pronounced back arch or thigh gap (just as examples), are both often found to be coveted, but neither is entirely useful to have. For men, achieving a very narrow waist circumference can come at the expense of muscle development and even strength that many important exercises can be instrumental in building for that specific region. All of this, and we haven’t even mentioned the disadvantages of walking around at 5% body fat.

To Men after Size: Most Actors Aren’t Big People.

When a 6 foot tall, 200 lb guy who’s in good overall shape comes to me saying he wants to look like Michael B. Jordan in Creed, I ask him if he’s sure. I also ask him to describe that body type, just so we’re on the same page. When he does, it’s usually revealed that we aren’t. “Big, muscular and lean” is the typical response. Sure, I’ll give you lean, and there’s definitely an appreciably visible musculature, but the optical illusion of size is one hell of a thing.  Let’s be honest: most guys who are really into working out also want to have a frame that reflects it. And I’d guess that half of that crowd also want to have a physically imposing presence.  Where actors in athletic movie roles are concerned, what can appear to be “imposing” on screen is usually revealed as far from it when you realize they’re the only person on camera, or are surrounded by people even smaller.  It’s the reason why The Rock (who is actually the same height and weight as I am, give or take a centimeter and a couple of pounds) absolutely gnomes anyone he’s on screen with. Here are some rough stats as food for thought. They may surprise you: 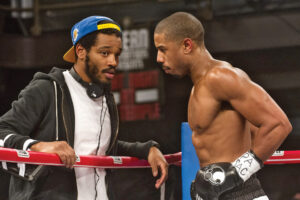 Let’s say you didn’t recognize faces. If any of the above walked up to you on the street carrying these dimensions and wearing normal clothes, you probably wouldn’t look twice.

I’ll put it this way. Lots of Hollywood bodies might look appealing and may be in shape – and that’s great. But it’s important to remember these are actors who also need to fit on the screen. With that said, if you’re a guy who’s after an imposing physique and want a size that takes up some space, you probably won’t find it by chasing an on-screen physique and making it your goal.  Especially where front-to-back trunk volume is concerned, these physiques really show the difference between a frame that’s large and imposing, versus one that’s smaller and compact, though still fit. Surpassing that developmental plateau was something I struggled with for quite some time, and as a result I would always drown in an XL sweater or long sleeved shirt. In order for people not to peg me as some tall, skinny basketball player, they’d need to see me in a fitted T shirt.  I’m sure the 6 foot tall, 200 pound client I mentioned at the beginning of this subheading didn’t think that dropping 25 pounds would be the key to looking like the seemingly “big” celebrity he saw on screen.

One more thing. Anyone with critical thinking skills knows that the numbers used by the PR teams of actors who undergo noteworthy body transformations for movie roles are exaggerated, to term things loosely.  Will Smith did not gain 35 pounds to play Ali; much less 35 pounds of muscle, as was often claimed in the media. That would take years, especially as a 32 year old (at the time) man who had already kept himself in good, muscular shape before. Numbers are embellished to help market the movie and actor in question – which is a smart tactic from a business perspective, and the layperson who knows no different thinks it’s true and completely attainable over the short term. It turns more heads to say Christian Bale gained 100 pounds when going from The Machinist to Batman Begins, even though it was more likely around half of that.

And in each of these cases of fast transformations, we haven’t even talked about steroids.

To Men and Women: Know What Else is Unrealistic? Magazine Cover Models!

I’m not even going to get into airbrushing and photoshop yet. Most fitness magazine physique models simply don’t look like that all year round.  And if they do, it involves a level of sacrifice that most balanced people with responsibilities are unwilling to make.

It’s possible to manage low body fat levels and eat well, train hard, and look great year round, but there are limits of what’s healthy and even more limits of what’s possible.  Seeing many posed, properly lit physiques shot from the perfect angle can reflect a look that will never be able to be duplicated. It can even be disappointing when seeing a live-action, moving version of the same thing (In the video I’ve added below, imagine seeing the “after” version of this woman do anything OTHER than lie there in that exact pose. It would probably look incredibly awkward due to the altered limb lengths and girth reductions!).  Even when it comes to mainstream lifestyle publications, often times camera tricks can create dimensions and proportions that basically can’t naturally exist, resulting in you, the viewer, creating a new and false standard to live up to where your fitness goals or body image are concerned.  That can be harmful.

Listen – we all have goals, and if those goals include “getting to a certain size” that we see in an image as we flip through a magazine, that’s fine.  But we shouldn’t forget reality. Skin folds when you sit down. Bloating happens. Embarrassing angles exist. For every “great” photo taken, there are 5 completely unflattering ones thrown in the bin.

Comfortable in Your Own Skeleton

I don’t think I was clear enough when I gave that 6-foot-tall client example earlier in this article.

A physique that that guy thought required a significant bulk phase and harder training, actually required him to lose 25 pounds, shrink his body by a couple of inches, and basically walk around shirtless –since he’d ultimately have to in order to make anyone believe he still carried muscle.  It’s a matter of perspective, but it’s also a matter of coming to terms with the fact that you’re just not built that way.

As a trainer, for the last few years I’ve really made it a point to highlight the differences in skeletal anatomy and how those things can affect the form used for a given exercise, or the ease of a given workout. Things like long femurs, wide hips, short torsos, long arms, or the opposite extreme of all of the above can have a huge impact on the outcome of your workout and more. The same line of thinking can be applied to goals regarding your physique and body image. Whether you’re male or female, being realistic regarding what’s attainable for your body type and skeleton would be a worthwhile first step in attacking your goal.  A 6’7” guy with long legs who really admires the body type of an accomplished Olympic lifter would be remiss if he didn’t notice that most Olympic lifters don’t have similar dimensions or proportions to him. A woman with broader shoulders, a large ribcage and narrow hips shouldn’t get upset when she can’t achieve the extreme hourglass silhouette she may covet.

My point is this: your goals become more attainable if the example you’re following is that of someone who in some way has something in common with your body type – regardless of how much more progress he or she has made.  If you’re a Jay Cutler body type, fighting for the Ferrigno body type, you’re approaching this the wrong way, and will likely disappoint yourself.

It’s time to get our heads out of the clouds and set realistic goals based on actually real things – not based on perfectly angled “ideas” that are brought to virtual reality thanks to the glossy lens. It’ll do a huge service to physical and mental health, and will help dispel the myth that training and diet are a quick patch job. A couple of weeks in the gym won’t have you looking significantly different than before you started.  And changing your body won’t be easy.  Doing so in a healthy way and achieving a balanced and strong body may not end up giving you the look you see on a magazine cover, for a multitude of reasons (digital manipulation being only one of them).  Even if you do everything “right”.

The faster you can come to grips with this, the faster you’ll realize how far you’ve come.