My Fleeting Attempt To Get Women To Lift Weights

Weights might not be sexy, and maybe even a little scary. But with all the new classes and trends out there, this one's worth the read. 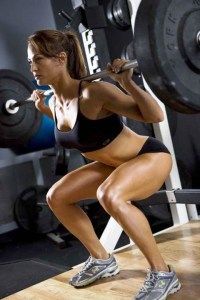 How many fitness class junkies do you know who have the body you ultimately want?

… Unless what you want is to be able to fit into a size 0 or 1 dress, with next to no “firmness”, a comparable body fat percentage, and no appreciable strength.

I’m prepared for the possibility of a flux of hate mail to my inbox.  Zumba, Pilates, Aerobics, Yoga, Step Classes, Dancercise, Muay-Thai-Fit, and any other abomination of the concept of training for fitness are all sub-par methods of making your body composition change the way you want it to – once again – ifyou’re not after the above.

By default, plenty of women shy away from the weight room for several reasons, the most common of them being that weight training will give unfavourable results and make women look far too masculine for the look they’re ultimately going for. Another would be the fact that a male-dominant crowd (which is generally what you see on the gym floor of most clubs) would be daunting, and they don’t want to feel intimidated while trying to get in shape. As a by-product, group fitness classes are often saturated with females in search of a place of belonging, and males in search of females in search of a place of belonging.

Before I get into the nitty gritty, I’d like to give a brazen-faced shout out to the media as the ring-leader of deluded thinking thanks to its commercial propaganda. “Fitness pundits” that you regularly see on TV may know differently, but routinely spread plenty of non-truths about what exercise to render results and physical change should be all about.  Whether they’ve got a product they’re trying to endorse for sales, or just trying to appease production companies for more media coverage, the message that “toning” exercises exist, that certain training methods train “stabilizers” and not surface muscles, and that it’s possible to transform your body into the one you desire in 15 minutes a day in front of the TV, seeps into the minds of the masses who are less than informed on the subject.  Like a cattle call, they round themselves up to overflow the 6PM Boxercise, Hot Yoga, or Kangaroo class, as per the on-screen directions.

Listen, if you’re one of those people who does the above for other reasons, then have at it. I can’t comment if you’re on that whole “zen” thing and don’t give a damn about the results you achieve outside of mentally. Do you.   As for the rest of us, however, it’s safe to assume that seeing physical change and training to look better occupies a significant residence in the mind of most average trainees. It may not be everything, but it’s present. I know among performance, health, and fitness, improving my visual body composition is a significant reason that I train myself. If proper exercise resulted in an exponentially worse looking body (even if health and fitness still improved), I likely wouldn’t be nearly as avid a trainee.

The number 1 fear about weight training in an ill-informed female mind is that muscles will grow, and the unwanted “bulky” appearance will be taken on.  I can’t speak for every woman when describing the “ideal” body type – which is why I haven’t illustrated that thus far. What I can hazard a guess on, however, is the fact that I’m pretty sure many ladies wouldn’t list excessive stomach fat, cellulite, extremely large muscles, a flat or shapeless butt, and no visible training-based “tone” in appearance as things they’d be OK with if they could design their own ideal body type.  Correct me in the comments below if you feel that’s inaccurate. Maybe it is.

The fact of the matter is this: It may be true – getting big and bulky comes from lifting weights. Lots of ‘em. But that’s not where it ends.  Weight training for increased size comes from a mixture of volume of exercise and intensity of exercise – that means for the most part, you have to be incorporating relatively heavy (let’s say around 70% and above of your max effort), for a lot of sets per muscle group (so the ol’ 3 sets of 10 thing won’t cut it). If ONE of those factors isn’t in place, you’re not going to grow. Ask any bodybuilder, and they’ll likely agree. Oh, not to mention you’ll also need to eat like a horse.

Without turning this into a rant (which I’ve done many a time as a writer), I beseech any women who believe the above to find pictures of their “bulky” selves when they were experimenting with the prospect of weight training (if they did) before they stopped after concluding that they were getting too huge. Compare these pictures to current photos. Then refer to the section of this article located 5 paragraphs above.  The truth is, you’re at more of a disadvantage when it comes to building muscle in the shortest period of time. Lower levels of testosterone coupled with higher levels of estrogen attest to that statement.  If you’re a 30something in the gym – male or female – you’re also not in the same place metabolically and physiologically as you were at age 21 or 22.

The stuff I was saying earlier about commercial propaganda is true. Its effects are far-reaching and often turn the general public away from the idea of proper resistance training, and minimize the importance of traditional barbell training methods as a true focal point of exercise for long term health, wellness, and to change body composition, when the very opposite should be encouraged. It’s the single positive and praiseworthy characteristic that I see in existence in the otherwise training debacle known as CrossFit.

That notion of importance shifts its way to the hot new class, savvy new product, or innovative new training method that’s causing wildfire in the fitness industry. When you see results from doing this, Don’t be fooled. You may have lost some weight or dropped a dress size from the cardiorespiratory demands of said workouts, but it’s likely you’ve dropped a combination of water and muscle to get there. That’s why it’s so easy to “rebound” if you miss a day, eat poorly, or both.

But I digress. Ladies, you need to understand that there’s a difference between size and strength.  Once more, any bodybuilder or competitive athlete would agree that there are many examples of guys who are big but not strong. Training specifically for voluminous, cosmetic muscle is doable and sometimes practiced.

On the reverse side – and much to your interest – there are plenty of examples that show it’s perfectly doable to become strong but not big. It’s one reason why athletes decide to use certain steroids. I don’t even need to relate the incredible strength-to-weight ratios of martial artists and gymnasts. Let’s water the term “strong” down and change it to “not weak”.  Not having any weakness in your muscles presents NO disadvantage in life, whether an athletic pursuit or just day to day living. Regularly applying forces against resistance – namely, properly training with weights – is the only way to increase strength effectively. You need to do it.

The Benefits of Lifting Weights and Training for Strength

The ones that are most applicable are the ones I’ll list as they come to mind:

To reiterate, strength and size are largely unrelated. You need to lift weights to be strong. No one has any business being weak, as it does no good for your body or your health. And we’ve already talked about the visual component. If you’re looking for fat loss, “firmness”, and athleticism, it doesn’t matter how much you get your sweat on during hot yoga, Zumba, or body pump. It pales in comparison to a properly designed weight training program.  You need to learn to move well, and become stronger while moving well.

Hey, we’ve all gotta start somewhere, but I’ll bet your bottom dollar that if you’re performing large movements like squats, overhead presses, deadlifts, and rows with weight as intangible as 5 or 10 pounds, you’re wasting time, and not getting stronger in the process.  The phenomenon of being in a fixed environment moving symmetrically shaped objects with the number of pounds plainly labelled on the side creates a hesitation in some minds, moving many away from reality.

How much do you think you handbag weighs?

What about your shoulder bag?

Don’t be scared by the number. Remember, that if the resistance you’re working against doesn’t provide a real challenge for your muscles, you’re defeating the purpose and won’t set yourself up for results. Trust your technique and be sure to make a goal of making progressions in your strength. Now that you’ve read the above, you don’t have to be scared of turning into the Hulk while you do it.

Hopefully with this I’ve convinced some ladies to take the plunge. Weight training isn’t everything it’s cracked up to be, and the only way you’ll come to realize that is by getting started and experiencing the benefits. It sounds unsexy because it’s not preached on TV, but I’ll end this article by asking the same question I asked at the beginning:

How many fitness class junkies do you know who have the body you ultimately want?