Personal Trainers: Do You Even Lift?

If you’re getting shown up in the weight room, or look like you should have an I.T. job… Something’s not adding up. 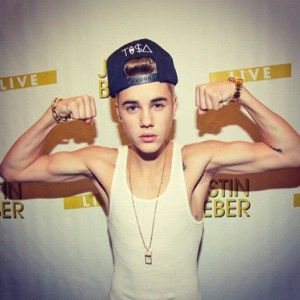 My Industry Goes ‘Round Thanks To The Millions Of Clients Who Depend On Our Service.

Whether you like to think it or not, the most common reason someone hires a personal trainer is for a “push” of motivation to help kick start their results – and the most common wanted result is that of weight loss.

I wish I could say fat loss, but most new clients aren’t yet informed that there’s a difference between the terms.   With that brutal reality comes another – what they see counts for a lot.

Now, in many cases, it counts for a little bit TOO much. But on a general level, I do indeed see where they’re coming from. For some reason, personal trainers are the primary culprits clinging to the “it’s not what you look like, it’s what you know” rhetoric despite freely using the same condemnatory mindset with their dentists, doctors, financial advisors or nutrition consultants.  It’s time we faced the music.

You Are Paid To Look Good

I’m just as sick and tired of the hackneyed “your body is your business card” adage that everyone in the industry hears and uses as the next guy is. But in addition to educating, our job involves inspiring, challenging and motivating clients. I’ll go right out and say this – a trainer who doesn’t look the part shouldn’t take on the role. 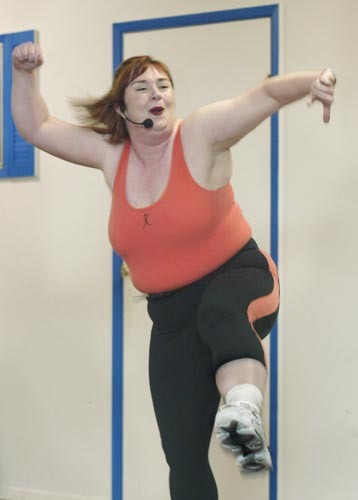 We all have different perspectives and opinions as to what a “good body” is for an average male or female. The same goes for males or females who call themselves fitness experts. It doesn’t seem like it’s a huge overstep to assume that among the prerequisites of a person in the fitness industry,looking fit should be included in the conversation.  One would think that people who give instruction and coaching towards any or all of living a healthy lifestyle, getting stronger, lowering body fat, or even preparing for competitions of some sort should be physical embodiments of at least ONE of the above endeavors.  It’s part of what clients pay for and appreciate. NOT just your information.

Don’t believe me? Ask them.

Body Image Critique From A Coach Without A 6 Pack

This doesn’t mean every fitness trainer needs to be ripped to shreds, jacked, and able to run 100m in 10 seconds while reciting the entire 4th section of Lower Body Anatomy, 2nd Edition.  The last thing that should be gathered from this is that members of the fitness industry aren’t human beings first. That means most enjoy cupcakes, ice cream, burgers and fries as much as the next guy.  Somewhere in this distinction, however, it became OK to look like you don’t exercise any more than the soft clients who enlist you for your help.

This sounds pompous, but it’s necessary – and someone’s got to say it. If you’re not the leanest person out there, at least be strong.  There’s got to be something to physically evidence that you belong in this field.  “Trust me, I’m smart, I promise” doesn’t cut it.

Quick disclaimer: If you’re a guy or girl who lost 150 pounds in a radical transformation from obesity to better health, the nature of this discussion would be a bit different.  It’s unrealistic to think you’ll look a certain way by a certain point for many reasons – and it’s unfair to disregard commendable progress made to this point. Whether such a feat and such a feat alone should warrant these individuals “ready to be fitness experts”, however, is worth another discussion entirely.

The face of this industry is a young one.  I’m pretty sure the amount of fitness trainers in their 20’s and 30’s far exceeds the amount in their 40’s and 50’s (most in the latter age categories tend to leave the industry for something that could promise a bit more stability). It’s safe to assume physical changes would be at least slightly easier to achieve on a younger body compared to that of someone much older, for obvious reasons – speed of recovery and rate of metabolism, just to name two.  On that note, I personally, as a client with specific goals, would hope that my trainer exhibits at least something of a physical manifestation of those very goals I desire to reach.

That Sentence Was Pretty Convoluted. Let Me Break This Down Even Further.

I generally help clients train for strength, size, and sport performance. For these reasons, “weak”, “small”, or “hardly athletic” are adjectives I don’t expect and would hope not to hear when associated with my name. I wouldn’t be a great representative of what I was promoting. It doesn’t mean I have to be the strongest, or the biggest, or the best athlete in each sport. For me, it just means that I have to have demonstrable evidence that time has been put in to achieve at least a recognizable level of such attributes.

I’ll be honest – I likely wouldn’t train for size with a pencil-necked 25 year old with chicken wing shoulder blades. Even if he said he had the cutting-edge secrets to mass gain. I also wouldn’t train for strength with a guy the same age, whose personal max effort deadlift or squat is barely breaking triple digits. To me, something just wouldn’t add up.

The same way it wouldn’t add up for me to get a cleaning from a dentist who had tartar deposits and gingivitis. Or stock market advice from a broker whose personal portfolio was in cahoots.

The reason I distinguished age in the first two examples is because in the case of older coaches, there’s still a chance there was a time they were competitive, or much more steeped in their training than current times show. Acknowledgment for that possibility needs to be made. In the case of a person in his early or mid 20’s, however, it’s very likely that if they’re skinny or weak, they never experienced having size or strength – ever. That means not only low experience working with clients, but low experience in terms of their own training too. Not a good combination.

Again I’m digging a hole of perceived one-track-mindedness. This is simple: I believe a coach should be able to hold his own in the weight room compared to the average guy (which would be most people he trains). And he should look that way too.  Whether you’ve got a higher or lower body fat percentage, something should tell an onlooker that this guy (or girl) clearly trains. And by the way, I didn’t mention 500 pound deadlifts as a needed prerequisite.

Stay In Your Lane! 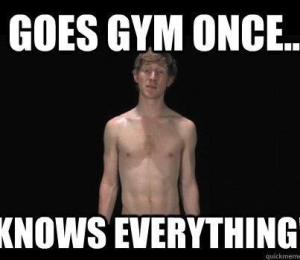 I’m sure it’s not in everyone’s interests to get hyoooooge.  If you don’t want to, don’t train for it.  And most importantly, don’t pass yourself off as an expert who can help someone else do the same thing.  And helping someone add 3 or 5 pounds of muscle isn’t the same as a full scale bulk program for someone after serious mass.

Likewise, a guy who’s never moved ANYTHING more than 225 pounds in any direction in his life probably isn’t wise to be doling out high-performance strength training advice to anything beyond a complete beginner.

Unfortunately, the ego tends to take over, and most coaches want more business – and if they don’t want that, they still want to be the number 1 go-to guy for all things fitness.  Being able to back off and concede to someone with more knowledge than you on a subject is an invaluable capability.

I can’t say what the “ideal” body looks like. My guess is as good as anyone else’s in that regard. What I can state is the difference between a body that works out and one that clearly doesn’t.

Forget societal “standards”. The nature of our work and what we signed up for kind of implies that we should have certain standards of our own.

My point remains: It’s a laughing matter when I see relatively young trainers whose average clients can clearly show them up in every element of fitness. I’m the last person to pose shirtless for a gimmicky bio picture – but I’ll still raise an eyebrow when I read an article on getting a big bench press, from a guy who’s plateaued at 150 for his sets of 5.

What separates us trainers from our clients shouldn’t only be what we’ve learned in class – it should be what we’ve applied in the gym through practice. Now, clients will often blow things out of proportion and think that the more ripped you are, the more you know. That mistaken thinking is better to address in another article.  What they should be able to think, though, is that the things their coach is telling them to do are things that coach can do also.  It’s surprising that this topic needs to be raised.

It’s time to stop hiding beneath the shroud of a good, smart mind. Looking the part in some wayshould be part of this game – and it’s a game you’ve opted to play.

If you don’t play it all, as far as your business AND health goes, you’re digging yourself a deep hole