Shut Up And Lift! Why Ol’ School Size Training WORKS For The Advanced

Yes, I said it. There IS a time when lifting till there's nothing left in the tank is a good thing. But there are some restrictions... 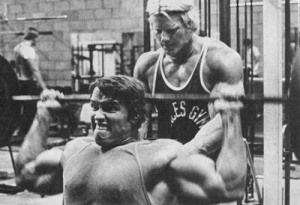 In the gym, smart trainers and coaches will sometimes shirk the potential for a good, intense workout when there are present muscular imbalances, asymmetries, minute technical flaws, or even potentials for injury in some indirect way.  In some ways, it’s prudent of the coach to think about that – especially if the training client is a beginner or novice to weight training.

As I’ve said before – building and maintaining a foundation is the mandatory prerequisite to doing anything intermediate or advanced in the weight room.

But with that in mind, it’s time to actually talk to the intermediate and advanced.

Sometimes it’s a good thing to get rid of the solipsistic uniformity that we all can get trapped in, especially when it comes to lifting, and realize that everyone is full of muscle imbalances, asymmetries, and dysfunction on some level, and the perfectly balanced person doesn’t exist. In no way am I saying that pursuing a better functioning body by way of preventative maintenance and rehabilitative tools is out of the question.  Rather, I’m encouraging advanced trainees to get their heads out of their hind parts and realize that hard work must be done at some point in order to see results.

I’m not a kid of the 70s, but when I look at footage from that era, I get the strange feeling that as many technological and research based advances we’ve made in the industry since then, the idea of hard work has been perverted by the fear that the best scientific methodology isn’t being adopted at every given moment.  Old school teachings, like knowing what lifts to prioritize when training for strength, size, or conditioning (hint: they’re all the same lifts) are indeed old school and timeless for the simple fact that they work.  Before I double back and endorse CrossFitting, let’s narrow things down a little bit and focus in on size training in specific.

First, I have to make an important distinction.

When a novice trainee comes to me saying he wants to train for size, I almost never actually train him for size. The thing is, nine times out of ten, a novice trainee usually hasn’t a smidge of foundation, and training him to move properly and subsequently become stronger results in tremendous size increases as a by-product.  As I said before, for these folks, foundation is everything, and is a precursor to advanced training.  There should be specifics coached on the proper physics and geometry of the barbell staples (squatting, bench press, deadlift, overhead press, and so on) to ingrain these patterns into their muscles’ memory, and guess what: they’re gonna pack on slabs of muscle during that process, and that process will last longer than a 6 week span.

Now let’s hypothetically take that novice trainee with no foundation who’s after size, and make him “truly” train for size with specific bodybuilding exercises. Let’s say a cheat curl, or heavy dumbbell shoulder press. Chances are the outcome won’t be the greatest, due to the fact that there are much more important things to prioritize where his body is concerned and advanced isolation workouts or exercises won’t serve much purpose other than frustrate his ability to release hormones, build muscle, and grow.

Back to my example of the 70s. Let’s reconsider the training methods we saw in movies likePumping Iron, with advanced lifters like Arnold and Lou relentlessly going at it. Would the cheat curls and DB presses work for them? Definitely. There was nothing fancy – it was basically a matter of “lift weights until the muscles you’re trying to hit are completely exhausted from lifting them”.

In my personal opinion, when size training is the name of the game, the guys in the 70’s had it right on the money.  These guys knew how to train, they’d been doing it for a long while, they understood how to connect their mind to their muscles and stimulate every last fiber, and they had the bodies to show for it.  Would they have benefitted from knowing about ratchet loading, force curve training, and other methods that came around later? Maybe.  But was the ol’school beat down they were laying on their muscles doing the job? I’d say so. These guys didn’t have to fight the daily fight of debating the “best method” out there for building size, because 35 more years hadn’t elapsed for those arguments to reach the intensity that they currently exist at.

We have to remember that though there are many similarities and common threads among size training, strength training, and conditioning, each of them respectively is its own animal, with size training having the most particulars in how things are done, and how many “rules” can be thrown out the window.  Case in point in the video below:

The legend himself, Tom Platz, is seen here coaching my man John Meadows (definitely who I’d consider an advanced client – wouldn’t you?) in a tough set of hack squats.  John has deliberately taken his heels off of the platform and is pressing the weight entirely through the balls of his feet and his toes. Plus he’s not coming to a full lockout during any of his actual reps. Plus he’s letting his knees pass forward over his toes.  Plus the weight isn’t close to 70% or more of his max effort, largely recommended for building muscle.  All big no-no’s. Right?

Because what John’s doing is stimulating the hell out of his quads, and that’s it. That workout set you just watched combines constant time under tension with rest-pausing, and a quad emphasis, to result in a ridiculous increase in blood volume and plenty of sarcoplasmic hypertrophy.  Long story short, Platz is simply exhausting the hell out of John’s quads by making sure he zeroes in on them as much as possible. It’s so unique in its simplicity that it almost seems like it’s new.

My point is, training for size is quite subjective and the lifter MUST be intermediate in order to understand that, and get a truly great physiological response from doing so.

Pushing your muscles to the limit increases the risk of your muscles’ safety as you continue through your workout. Period. There’s nothing that will ever change this.  As much as I bash CrossFit, I do believe there’s a time and place to push it to the limit – and sometimes beyond.  When it comes toreal size training, we’d definitely be choosing the lesser of two evils when employing this kind of strategy over doing it when conditioning (especially Crossfit style).  Experience extreme muscular and cardiorespiratory fatigue during an isolated exercise, versus the same during a heavy hang snatch for reps?  You can decide.

Anyway, I’m talking about size training here. There’s got to be a time when you intermediate lifters pick the weight up and don’t count your reps – you just lift until you can’t do any more for that set.  Then repeat.  Then go home and eat.

I guarantee you’ll be pleased with the results to follow.