STOP Complaining about the State of the Fitness Industry. At Least Until you Fix These 3 Problems.

‘Cause we both know you’re contributing to at least one of them.

There’s an important point that most people with an interest in fitness seem to forget: It’s the fact that at its core, the fitness industry should be about health, wellness, and basically getting physically (and even mentally) better. Whether most want to believe it or not, the current state of affairs seems to be bringing people further and further away from that silver lining despite looking much more appealing from surface level.

What I’m saying is this: I can understand why people who may have the best intentions of getting in shape, often fall off into feeding the bad habits that keep them out of shape. It’s because gym life can easily cause a newcomer to become unmotivated after a closer look.  So much of fitness culture has taken pride in the fact that they’ve got it wrong – and I’m not only talking about bad training programs.

Why is Everyone So Angry?

Somewhere, someone decided that being interested in fitness, good training, and achieving worthwhile results should come hand in hand with being a scowling, standoffish curmudgeon who gets angry at the weights before every set and acts like war is looming over his city. I’ve spent my share of time examining these types and still don’t fully understand it. It’s cool (and of utmost importance) to remain focused, and hey, a tough set is a tough set. But when it kills your ability to smile or politely acknowledge someone in your immediate proximity, you’ve just transitioned from being focused on your workout to just plain being a jerk.  The “mean mug” that I’ve gotten from members on repeat occasions when walking into a gym makes me think of newcomers who have been years removed from anything athletic, and how intimidating it must be to not only see a bunch of dudes with a bunch of muscle as soon as they walk in, but to have them stone-facing you at the same time.  Peel back the layers and you realize that some of these people (read: most of these people) are actually relatively pleasant and only putting up a front to fit the ambiance.  It sounds absolutely ridiculous, but I really think that if the pioneers of bodybuilding and powerlifting training years ago all trained with the gracious demeanor of, say, a PGA champion, that most of the world would follow suit.

Of course, I’m generalizing. Many gyms have staffs that are attentive, pleasant and helpful. But around my city, it’s largely dependent on the clientele those gyms are looking to attract. In my experience, gyms that aim to cater towards people who really take this stuff seriously end up with a membership base apparently fueled by rage. The 49 year old family man tends to cast out a slightly different disposition than the 25 year old meathead in my neck of the woods. And he’d likely go to a different kind of gym to boot.

Listen, the fact that there’s even a rift amongst gym styles, focuses, energy in the first place is enough to raise an eyebrow. And this doesn’t mean someone who’s daunted by a vibe should settle up at their local Planet Fitness for some “judgment free” training either. I’d be a fool to overlook the good qualities of hard training, goal setting, and general motivation that many of the more “hardcore” gyms can bring to the table.  I just think it benefits everyone to remember that at the end of the day we’re all still people who (hopefully) lead lives outside the confines of the weight room.  From a human perspective, that means something.

Over the last few weeks I asked a few people the same question: Would you use Facebook or Instagram the same way if the “like” and “comment” buttons didn’t exist?  For people who solely use both mediums to post photos of nothing notably important, it’s a worthwhile question. Keeping this all fitness-themed, it helps to remember my opening statements. The core purpose of fitness should be to promote health and wellness. Taking a shirtless double biceps photo because it’s “Flex Friday”, or a scantily clad selfie for your Instagram following may seem like innocent fun and a celebration of health and newfound confidence. But if that confidence solely rides on how many people respond with bids of positive reinforcement, aren’t we missing the point?

Moreover, promoting fitness and keeping a shirt on can be done simultaneously. What can come off as genuine confidence is something I suspect only applies to a small percentage of those claiming to have it. And we haven’t even begun discuss the point at which all of this starts to encroach on self respect.  A glass-half-full viewpoint may see acting this way on social media, complete with the likes and comments to be just the emancipation from the depths of insecurity needed to get someone over the hump for good. This is true, but its effects last only as long as your latest post. Worse yet, one can only assume that your “excellence” is quickly forgotten as soon as the next guy or girl does the same thing on his feed.

Unfortunately we live in a day and age where the masses are more receptive to the fitness advice of a Kardashian compared to that of a seasoned veteran trainer who’s had his nose to the grindstone in several ways.  A fitness professional might see baring all as a way to “keep up” without realizing that beyond a certain point, it only exacerbates the existing problem of the industry being steeped in superficiality and needing a change in perspective. It also only services the few individuals who are truly confident in themselves and their bodies and don’t find that confidence through what others think of them.

I get the impression that more and more of us are looking for ways to be praised for doing things that aren’t really praiseworthy in any sense of the term.  Finishing a morning walk went from something to be briefly pleased about to start your day, to something that accumulates a serious wave of short – term attention, giving us the feeling that we should feel way better about ourselves for doing it, because everyone else seems to be happy for us. 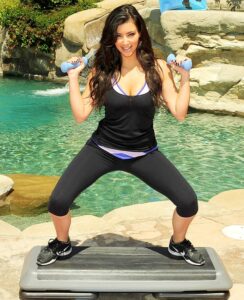 By the way, back to the question I asked earlier – the “like” and “comment” button discussion: an overwhelming majority of people I asked fully acknowledged that they post the selfies for the comments and likes, the attached ego boost, and not much else. They also said they wouldn’t do it nearly as much if those functions weren’t made available.  That makes for some food for thought.

Selfishness in All its Forms

The widespread circulation of fitness advice and training methods that are unsubstantiated or just plain wrong or dangerous is highly accessible and easy to find.  It also eclipses the amount of good, sound fitness advice circulating from well-read, experienced coaches.  This discrepancy is made worse when the good coaches are only willing to offer advice to a person at the gym if they’re paid for it.  Add the hardcore mean mug and accompanied behavior to the mix that I spoke on earlier and it makes for an atmosphere that could stand to be improved.  I get it: time is money. I’m also against people taking advantage of someone’s livelihood just because they spent 5 minutes currying favor with them first. But as adults, we have the power to discern when someone who needs help has innocent intentions or is trying to milk you like a cow, and we can react accordingly.

The idea of withholding information from clients or even other coaches who are less knowledgeable than we are is selfish for a few reasons. First, it implies that we’re the pioneers of that information, and we didn’t learn it from someone else telling us about it.  Second, it displays a disregard for the knowledge level of the industry to be improved. Third, it shows that we don’t have an interest in people staying healthy and safe.  I say this with a grain of salt, since we need to be paid for our jobs. But first impressions can stand for a lot, and can be the make or break factor in many long-term relationships and even more long-term clients.

Many leaders of the fitness industry go to lengths to educate fitness professionals with tools and knowledge via numerous conferences, seminars, workshops, and other methods of continuing education to give coaches the tools needed to better train their clients. As great as this all is, I humbly believe that the hard truth is that the “fluff” won’t disappear from the fitness industry until we start making the general public the true focal point. The faster the “base level” of general fitness education increases (so that the layperson knows simple truths like steady state cardio isn’t the only method to use to burn fat, or that training for strength and hypertrophy won’t make women bulky, or that 10 minute workouts, 3 days per week won’t transform your body), the faster we’ll see the downfall of trending fitness fads that promote fluff for profit and give this industry the tainted identity that it has.  And this needs to be approached with the same immediacy that those very infomercials imply their viewers should have when calling their hotline.

Sharing is caring. Keeping knowledge to yourself could mean being a big fish in a small pond, but at the end of the day, that doesn’t mean much.

We’re All Part of the Problem

The truth is, each of the subheadings above actually has both a positive and a negative aspect to it. I’ve just decided to focus on the negatives and how they can harm the dynamic of the fitness industry, both for its professionals and its followers.  It behooves me to acknowledge that getting focused and pumped and even a little aggressive could be a great driving factor to crushing a solid PR.  A trainer should look the part, and his or her body can help his business a whole lot to show that he or she is a disciple of his or her own craft. Having knowledge, attending courses, and realizing that the nuggets of information you possess as a member of the industry hold plenty of value is important, and something that definitely needs to have a price tag attached to it.

It’s what we do with each aspect, and just how far we take it that can be the defining line between what’s healthy and drives the industry along in the right direction, and what takes it far off course.  All three of these issues may not apply to every person who reads them, but I can guarantee that at least one of these points applies to us all.  Whether we’re trainers or not, we could all do well to give ourselves a cool, objective reality check. We need it.