...Unless you want a false sense of reality for your goals, that is. 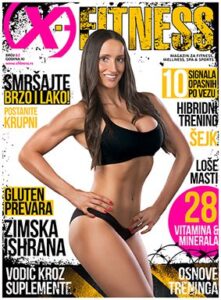 I’m Tired Of Stirring The Pot Just As Much As You’re Probably Tired Of Seeing Me Do It, But This Couldn’t Wait.

In a previous article I wrote, I called out fitness competitors for the way many of them view themselves and their activity (not “sport”), and how this can spill itself over into the way their clients are trained as something of a by-product. But that’s not quite the extent of the damage.

Time and again, a client (often female) would send or show me (their coach) a photo of the cover model to any given popular magazine and say this is what she aspires to look like. The women in the pictures usually possess the same physical characteristics: Slim, very lean waistlines, low body fat anywhere in  the entire body, and zero water retention, with a musculature that gives visible evidence of appreciable training.

To many people – both male and female – it’s an attractive look. There’s no denying that.  The problem is, it’s not realistic to think that this can be sustainably attained.

The average person looks at these kinds of images and sees nothing beyond that very photograph. Maybe that’s the point – I don’t know. They may even compartmentalize certain body parts and say that’s what they want their body parts to look like. They’re not really taking time to consider just what it is that goes into having that body, or shooting that photo.

Is it possible to look like the photos on fitness magazine covers or the physique models that grace the pages of training articles?  Of course it is. Those are real people with real bodies. Forget about retouching and photoshop – In general, these people really look this way when the photographer presses the shutter. Read what I wrote above once more. I didn’t say it’s unrealistic to think this body can be attained. I said it’s unrealistic to think it can be sustainably attained.

I’m still torn by the fact that the world of fitness competition involves people making the conscious decision to train hard while mistreating their body’s physiology through a diet that may be devoid of certain foods or nutrients due to the negative effect it’ll have in perfecting the desired physique necessary for the contest – all for the sake of stripping down to present a certain version of themselves to a fawning audience and biased judges. If one can look at me with a straight face and tell me that repeating this process doesn’t leave a perverted imprint on the psychology of a healthy mind, I’ll contact the 5800 fatheads at the Academy and get you nominated for a Best Actor Oscar. You’ll win.

The truth is, most fit people don’t walk around looking like this on any given day that you catch them. That’s why it’s so rare to come across this in real life – and when you do find one, it’s anomalous. Even if it’s to a lesser degree than that required of on-stage competitions, there’s still a “prep” that goes into photo shoots for magazine images to ensure the right look is achieved. Most competitors or physique models look different (and often much more “normal”) during off seasons because of this – think about it; why would a model try to look anything less than his or her best for a photoshoot? But sadly, the aspiring average Joe seeks this – what they see as the finished product – as their new permanent, natural look. It’s not plausible to think that people look like their presentation bodies day in and day out, year round unless they’re also being draconian with their dietary restrictions year round – which is worthy of its own subheading altogether.

The Subheading About Being Draconian With Dietary Restrictions

Eating the same meal from Tupperware each day while vehemently opposing anything that may cause a temporary spike in your insulin levels or mild bloating for an afternoon, isn’t too far off from the truth when it comes to attaining elite level physique results. Whether that’s entirely healthy or not, it’s known fact that you’ve got to manipulate your diet in order for your body to reflect it the way you want it to. There’s no getting around it.  A fitness competitor who’s been in the game for a while may realize such demands and rise to the occasion for 3 or 4 months out of the year for their competitions. But an average person who sees an image and resultantly “wants that body” has no idea just how much of their lifestyle would have to change to get it.

Hopefully, you know me and my writing well enough to know that I endlessly promote a balanced lifestyle change to elicit sustainable results that make your hard work pay off. But I’m not going to tell a 31 year old with a high stress, 60-hour-per-week job, an average social life, an availability of 3 to 4 days per week to train, and fairly balanced psychology, to go questioning life if he or she had a burger, fries and beer at the raptors game last night.

Once again, it’s all about sustainability.  If you train consistently and make good food choicesmost of the time, then you’ll probably have the healthy, strong body that reflects that. What’s more is you’ll likely avoid the dangerous cycle that comes from massive weight fluctuations from excessively restrictive dietary periods of the year and their ensuing food binges.

Another important factor people forget about is the fact that a certain “look” may not be in the cards simply because of the fact that you’re not shaped that way. Constantly obsessing over a smaller waistline or having 8 visible abdominal muscles may be more of an issue than you think if you have a naturally thick trunk or a less pronounced tendon sheath covering it (let alone if you train well, using big lifts and prioritizing strength). Good training will probably negate the pronounced back arch that’s type cast in many models’ bodies for the mock appearance of developed glutes.  And if you’ve genetically got wide hips, you’ll probably be among the minority of those seen modeling for physique, because that’s just how it goes. Short torso? Long extremities? Thick ankles and wrists? The list can go on and on.

The bad news is, not achieving the desired look of these models, possibly due to reasons above, can cause an average Joe’s mind to tailspin into constant dissatisfaction without taking the time to recognize how far he or she may have come with his own training, nutrition and physique. Most people who want the bodies they see on paper wouldn’t be willing to make such marked changes for the sake of getting one – some due to laziness and others due to what I think is normalcy.

There are too many factors to consider to become caught up in aspiring to attain a carbon copy physique of a photoshoot-ready fitness model. A superior alternative would be to make yourself the only true point of comparison.

Let me digress for a minute here. This blog article seems to be coming across as something of a downer as I sit here typing it. Appreciating someone else’s hard work and viewing it as personal motivation to train well and stay disciplined with your diet is a good thing.  Not stopping until you’ve attained a “look” set under unrealistic, largely unnatural pretenses is not a good thing.  I also can’t help but raise an eyebrow when I hear motivational words from pro bodybuilders or physique competitors addressed to the general public that may reflect their own mentalities towards training, which may involve any combination of obsession and insecurity as major pushing points to kick off such behavioral patterns. This isn’t everyone – but it’s definitely some. Is it unrealistic to think that it could encourage others to adapt the same thinking patterns?

I’ll cut to the chase here – it doesn’t exist. And the search will be never ending if you’re a person who decides to choose figure and physique models as your guide, rather than setting your ownattainable goals and reaching them. Doing anything but the above just isn’t real life.

This wasn’t meant to malign what you do or the reasons why you do it. In fact, if you read previous work on the topic, there’s actually a significant amount of what you do that I have to credit with respect. It’s just important to remember that this lifestyle –the one you’re putting on display for the masses to see, judge and praise – affects more than just people’s eyes. It affects their minds, and has the potential to contaminate their thinking towards proper fitness, good self esteem, and a healthy and fit body and mind.  Even if you’re not trying to make that happen. Some of the best fitness competitors I know don’t broadcast their chosen lifestyle in attempts to get others to follow the same path or attain the same mindset, and to me, that’s respectable.

It all comes back down to the question of training and eating well to look good, versus looking good because you train and eat well. There’s a noteworthy difference that can change your entire outlook on your fitness journey. Don’t let something that can be so enjoyable start affecting your mind in the wrong ways.