Stop Trying To Be Hardcore

Because you probably aren't. And if you are, you're still probably an idiot. 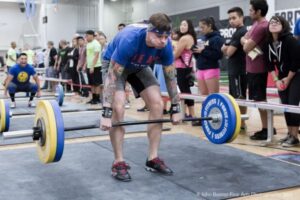 I’ve seen the new commercials for Reebok on TV and I’ve been taking time to gather my thoughts before vomiting an onslaught of one-track-mindedness.

I’ve said it before and I still believe it – too many of the masses see pro athletes, strongmen, bodybuilders, and now, “CrossFitters” and the message of what training is supposed to deliver for someone who does it, gets lost.  All of a sudden, elite level athleticism isn’t something one should work towards in a progressive fashion. Rather, it’s something you should train like, right out of the gates. It overlooks your starting points and sometimes your goals. It skips the many steps in the form of years of practice, dedication, and even genetic gifts that make such levels of capability possible.

It’s masked in the claim that this is to be viewed as normal. If you’re not doing this, then you’ve got more work to do.

This stuff has infiltrated the thinking of commonfolk for longer than they may realize. Just when the age of technology and information has reached a point where people have access to plenty of good training info, we go ahead and pervert the idea of training – and not just by making the training automatically prep for a competition.

By making the act of training in itself a competition.

North America has the most sophisticated fitness equipment, the most money, and some of the world’s most brilliant coaches, but they’re still the most obese continent on earth. And I don’t think most fat people watching commercials of lifters looking down at their bleeding hands courtesy of the daily pull up bar conquest will be inspired. I don’t think watching an AC/Heating inventory clerk drop his apron during his evening break to do kipping leg raises in his jeans will make the next guy decide to butt out his cigarette on his next primetime 15.

I mean it could, but I think that even more people will be deterred.

GET FIT, NOT CROSSFIT

The intentions for all this stuff are good. We want people to get fit.  But people miss the message when they get caught up in the propaganda, and all of a sudden everyone’s trying to “out-hardcore” everyone else.  My friends who like to run aren’t hardcore enough unless they train for a marathon.  Triathletes are no longer worthy unless their venture involves climbing rope walls and swimming through mud.  Why are the hardest things in training being made available to the least athletic people? Why couldn’t it just stop at “strong is the new sexy”?

The by-product of all this is simple. Training strays from its original import of making a body healthier, and the mind gets crossed up into thinking that in order to improve fitness and health, these measures need to be taken.  Truthfully, it’s just like it’s been said about diet plans. Any training methods you can’t see yourself following in a year, 10 years, 20 years, or into your old age is backlash waiting to happen – in some way, shape or form. It could come in the form of an injury, unsustainable results, or at the very least, a deranged psychology.

Everyone wants to worship someone. It’s almost like we can’t go two steps without being led by another person who we look up to.

In itself, there’s nothing wrong with what I’ve written above. It’s important that we have sources of inspiration.

But are you telling me that the gym bro wearing the “Squat Till You Puke” shirt who’s bellowing “Yeah Buddy!” at the top of his lungs before his heavy sets, just happens to have the same personality and method of psychological prep as Ronnie Coleman?  Is it impossible for someone to have a heavy max effort that’s actually preceded by relative silence?  I call BS.  All of their incredible accomplishments aside, guys like Coleman, Kali Muscle and CT Fletcher have personalities that became iconic on their own, raising their profile and producing millions of copycats.

Millions of copycats. That’s millions of people in the gym, training, right? Forget the grunts and groans, that’s a good thing!

Don’t forget that for every one Coleman poser, comes 3 self-conscious ladies or ambivalent family men, who are scared away from the weight training section of the gym and opt for an hour long cardio session instead, granted they don’t leave altogether in favor of a Planet Fitness membership.

“We Do this to Be Better, Period.”

The commercial in the video implies that training like this is the way to “be more human”. There’s a fine – but perceivable – line between training hard to improve your body’s health and fitness, and training hard to say you train hard. One requires critical thinking and knows when to shut it down. The other gives you bloody hands.  Training this way to be “more human” is as oxymoronic as saying we should never eat a cupcake or pasta ever again for the same reason. That’s not human at all.

Everyone should train hard. The catch is, they should be doing it within their own capabilities, with no one’s performance to reference other than their own. Just like it takes time for an athlete to work towards competing, and even more time for one to compete at a high level, the same goes for a fitness trainee. Extremely physically extolling workouts (of “the day” for example), should be reserved for those already conditioned enough to do them.  That rules out 85% of society.  They have bigger fish to fry than worry about what the next guy can deadlift, and how many pull ups he can do in 3 minutes.

My point is that popular “hardcore” trends in existence today shouldn’t discount more conventional (and sustainable) training methods used by good coaches for the masses to benefit from. One thing many of these images, posts, ads, commercials and the like consistently leave out is the fact that these extreme methods of training – yes, I said extreme – are to be performed at one’s own risk. Chances for injury are even higher in potential than a Caribbean family having a Marvin somewhere in its genealogy.   Coaches like me and my colleagues work hard to show people what training’s really all about. “Hardcore” wannabes often put on a show so others can tell them how hardcore they are.

Then they usually get hurt.

If you Want to be an Animal, Here’s a Biscuit

Really. There’s not much benefit from trying to act like the ultimate training ‘badass’ with the way you train or act. It may impress some like-minded and similarly insecure lifters, but it won’t improve your training longevity. In most cases, the people who lack balance in and out of the gym when it comes to training, have fewer people to relate to – and discourage people from following suit.

Too much of anything is never good. Don’t learn the hard way.