If you're a diet and exercise junkie, you're probably a little crazy. 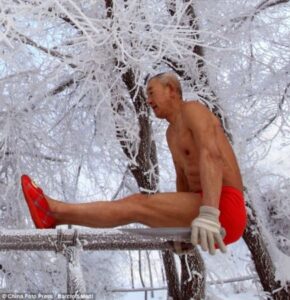 I’ve learned that mental discipline is a factor of prime importance when it comes to seeing serious results in the gym. Most other things don’t matter; if you condition yourself to show up to the gym regularly and consistently, eat the right things for your goals, and do so for an extended period of time, you’re going to see the results you’re looking for.

I’m a believer that asking clients about their lifestyle in harmony with the goals that they’ve hired a trainer to help reach, is monumentally important for their gains.  Long story short: if your lifestyle doesn’t support making fitness a priority, you won’t get into good shape.

So we’ve established the facts. Your physical fitness is sensitive to what YOU put into it, both in and out of the gym.  The eyebrows begin to raise, however, when I (like I always do) take a minute to examine the opposing side of the coin. The side where you can apply too much of a good thing.

Before I continue, I’ll say that I’m a proponent of balance. Whether it has to do with play, work, or something else, my opinion is this: Anything done outside of moderation can have negative ramifications on your health and wellness – and that can include mental health also. Think about it –  A large company CEO who works 90 to 100 hours per week may be exalted for his ambition and drive to achieve a high position and great success from a secular viewpoint,  but the likely sacrifice it’s meant for his family, health, and overall work-life balance could be worth question in conversation.  The same goes for role-model athletes.  It’s not a rarity to hear stories of legends like Michael Jordan or Kobe Bryant hitting the empty court two hours before practice starts to knock down 1,000 free throws or jumpers. Every day.  At 4 in the morning, while the rest of the team is still fast asleep.  I believe in both cases it’s to be respected for what it’s worth, but I don’t believe it’s “normal” behavior in the grand scheme of things – because if it was, everyone else would be making the same sacrifices in doing it too. Examples like these are what separates the good from the great.

Bringing things closer to home, usually working out, getting fit, and staying health- conscious is looked to as a remedy to things like psychological weaknesses, a one-sided lifestyle, or just as a general way to look and feel better. It’s a way to increase your life span.  For that reason, no one looks at this ‘good thing’ as something that can elicit the same psychological results in a negative light.  I don’t know why the same rules don’t apply here.  I’ve found there’s a fine line between being passionate about the fitness life, and letting it consume one’s life all by itself.  A proper diet and regular exercise should be a part of a healthy and balanced lifestyle. Once it becomes more, other elements of that lifestyle may risk suffering.  Goals need to be met, and discipline needs to be applied to reach them – but becoming overly preoccupied with macronutrient intake, workout scheduling, programming, and all other things fitness, may take the “enjoyment” and “passion” out of the equation and liken the act of exercise and diet to that of a part time job.  That’s not good (ESPECIALLY if your point in pursuing fitness and fitness-related goals are entirely recreational, meaning you’re not an athlete or competitor of sorts).

This doesn’t mean I think training more than 5 days a week and ditching bread from the diet is going to send you to the looney bin.  I guess I’m more concerned with what it takes for someone to deviate.  I’ve known people who beat themselves up for missing a workout or a PR or eating a high-carb meal. They tend to be the same people who only seem to talk about training in conversation.  So again, I pose the question: Passion or Problem?

You have to understand that today, I’m deliberately overlooking the countless advantages of training frequently, eating as clean as possible, goal setting, and training for improved mental capability to focus on the negative risks of having exposure to too much of a good thing. It’s an area that I don’t see brought to light too often, but I do think there can come a point where fitness is no longer healthy.

I’ve never competed in a fitness show, nor been involved heavily in that scene, and the things I’ll relate under this subheading will be based on the experiences of many individuals I know who are involved with it, coupled with my exposure to it from outside-in.   If that idea makes you hypersensitive, now’s the time to choose a different article to read.

For those who remain, I want to reiterate that these are my opinions and observations of a culture that I’ve had a number of years of exposure to.  A number of competitors in fitness and bodybuilding contests have mimicked my sentiments.

Put simply, I genuinely think it can mess with your mind – especially if you have tendencies towards insecurity with body image (especially this!) in the first place.

I have plenty of respect for the discipline and just straight up HARD training that’s necessary to prepare for a fitness show.  But consider the following: Where I’m from, I see many physical “transformations” where a guy or girl loses or gains a serious amount of weight to get in proper shape. If they pull this off, naturally (and often), the next goal that often follows is that of “competing” or “doing a show”-  and it’s usually reinforced by whoever their close friends or trainers are.  It’s viewed as something to accomplish, and maybe even an act of “going the distance” per se – ultimate fatness to ultimate fitness, as it were. Commendable.

If that competitor is strong-minded.

What makes that statement important is investigating what the motivation was for desiring to do the show in the first place. There are many people who go from fat to fit, and then compete. I’m sure most in this particular scenario don’t think about competing when they begin their fitness journeys – that comes later on.  Taking a glance at their past (for some reason, I always think high school) may see them as the butt of mean jokes, exclusion or ridicule from the public eye. It’s a cold world out there sometimes. Plenty of judgement could lead to insecurity about their current levels of fitness and a healthy desire to make changes. Once those changes are made, however, what is the inception for the desire to get on stage and pose in front of a panel of biased judges (quick note: all judges in ANY sport event that requires judgement are biased. That’s why decisions usually aren’t unanimous; because different elements of a performance or showcase will strike different judges in different ways, and impress some judges more than others) in hopes of winning?  Could it go beyond a feeling of accomplishment and tiptoe into the realm of seeking validation from an external source? What about the reaction to next-level obsession that they’d have to take on with their exercise routine and dieting while in contest prep?  I don’t know the answers – only the competitors can answer those questions for themselves. The same situation can be considered from the alternate angle of someone who previously had eating disorders and was always severely underweight.

I am not a psychologist, but I believe that these things (namely obesity or anorexia) have the capacity to affect mental health and wellness, and going “the distance” to the other end of the fitness spectrum can be a double edged sword, where that ‘passion’ I talked about earlier starts to dissipate and the intention becomes grayed or lost altogether.  It’s something to think about.

Then there are the people (who probably comprise a slight majority) who enter shows for the love of the competition, and not much more.  The ones who have always tried to lead a healthy lifestyle to some degree, perhaps have been previously involved in other forms of competition, and found enjoyment and fun in the challenge of preparing for a fitness competition as recreation. I’d love to think that this is the motivation for everyone, but tend to think that that’s far from the truth for many.

So is it taboo for me to address this? I may be crushing the dreams of young training enthusiasts around the globe with every word I continue to type. But hear me out. I feel that if the unhealthy warning signs of many types of contest prep dieting (including caloric restriction, nutrient restrictions, and water restriction) are often written about with regards to competing, that the unhealthy warning signs of the same things on one’s psychology should be noted.  It’s not for everyone.

Leading a healthy lifestyle means that getting (and staying) in shape had better be in the equation. It also means that you should be eating well and making good food choices, most of the time.

MOST of the time.

For those of us who aren’t being paid to upkeep a certain image or play a professional sport, exercising proper training and dietary habits should be a big part of a healthy lifestyle. But I believe there’s also a smaller part of that same healthy lifestyle where worrying about those things shouldn’t enter the mind or thoughts at all.

So if you’ve been training hard and you’re in great shape to boot, every now and then take a day or three off, and grab a burger with everything on it.