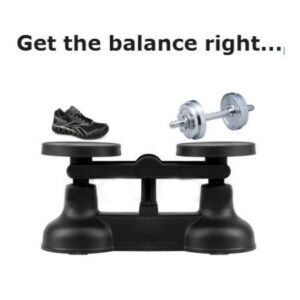 I don’t have a snazzy topic sentence to appeal to the readers and up my rankings on google, or whatever.

The age-old topic of ‘jogging’ has become one debated within the strength and conditioning community for a while. Add that to the growing abundance of overnight experts and Instagram trainers and the stage is set for a lively debate. Unfortunately, the commercial media and also the sporting world confuses the minds of many, and prevents them from making a clear and sound judgement call based on plausible info.

As a trainer, I like to call myself a generalist. On my current roster, I train men and women aged 40+ for general conditioning and fat loss, 20-somethings for direct hypertrophy and strength training, and will be re-adding some sports athletes for the upcoming off-season. It’s a mixed bag that presents unique challenges specific to each category of client. It tests my skills in multiple facets and for that reason I’d like to think that my approaches can cater to the needs of a general crowd of abilities, goals and age groups, pending refinements.

That’s why I think I’m in a good place to talk about the whole running thing.

I’ve noticed it always seems like the wrong representatives are the ones passing the judgement for or against running. Strength training aficionados clash heads with running zealots to create an equally unbalanced debate. People who are either immersed in the jogging scene, or waist deep in the weight training world will have polar opposite views that are correspondingly bullheaded.  The running enthusiasts boast the endorphin release, fat loss benefits, and improved athleticism that comes along with getting your daily mileage in. It seems like the further these folks run, the less support they have to substantiate why they do it.

On the other hand, many strength coaches will excoriate anything slower than max-effort sprinting at all costs. Damage to the load bearing joints, muscle atrophy, a poor method for fat loss, and a way to perpetuate muscle imbalances and create dysfunction are but a few of the things that will be used in arguments against running.

In actuality, I agree with both sides.

Just like I’ve said before, when asking questions about training, it’s probably a good idea to raise an eyebrow or two if someone gives you a direct answer to all of your questions, all of the time. The one and only blanket statement that I like to use that covers virtually all principles of training is “it depends”.

There are too many variables in this field of study to ever make a be-all and end-all conclusive statement about virtually anything. Certain sets of evidence can support an idea, and a trainer who’s good at exercising common sense can use this evidence to develop his train of thought, philosophy and training style. But things that a trainer can’t control when meeting a client, such as the client’s athletic background, injury history, height, weight, sex, anthropometry, and most importantly, goals, virtually apply across the board and can create a world of caveats when it comes to “how to train”. We need to realise this truth.

When clients tell me about how good they were on the weekend because they went for a run and had good meals, it’s a bittersweet celebration. On the one hand, the chances they’re achieving the results they’re hoping for by doing this are slim. On the other, making the effort to pursue some form of exercise at a time they normally wouldn’t is to be commended.

I’m glad I used that word too.  The lifting extremists tend to forget that there indeed do exist some people who do take up running simply as a form of exercise – not in hopes of fat loss, or a means to get stronger bones, or as a way to build muscle.  What happened to addressing those who run to improve their cardiorespiratory capacity – Or because they just plain enjoy it?  I find it funny that these things aren’t considered.

Listen, I’m a strength coach. Of course my preferred method of training for most health and wellness benefits is and will always be resistance training. It can be argued that everything we do demands a component of strength, whether that involves being mobile, agile, powerful, flexible, or even co-ordinated. Strength factors in somewhere in the details of those skills and should thus be trained for improvement on a consistent basis as it will disadvantage none of the above faculties.  With all of that said, I also believe this:

PEOPLE CAN (AND SHOULD) DO WHATEVER THEY WANT, AS LONG AS IT SERVES AS A SUPPLEMENT TO A PROPER RESISTANCE TRAINING ROUTINE.

It also doesn’t mean 2 weekly strength workouts with a competent personal trainer, amid your 90km of cumulative “weekly mileage” work either.

Both of those scenarios don’t represent supplementation, because in both cases, running is far outweighing the amount of time spent training to prevent damages running can cause to the body on a skeletal level. In my opinion, making a priority of practicing the primal movement patterns and some of their assistance exercises several times per week is the true key to optimal health, and the true key to not falling victim to running’s negative side effects.  The people who get damaged from running  and have a list of chronic pains and muscle dysfunctions often have made a choice of how to divide their training time; especially when “free time” is limited, resistance training usually isn’t the first thing that pops into a running enthusiast’s mind. So the running enthusiast runs.

And much to his chagrin. This imbalanced thinking is a precursor to the belief that running and running alone is a perfectly complete form of exercise that covers all the necessities.  And it’s not.

But neither is weight training. Especially if you’re looking for overall athleticism, mobility, or other areas of fitness. I’m not one of those dogmatic fitness pundits who will blindly declare that weight training is the answer to every single problem under the sun. There are many things resistance training addresses, especially if the overall conditioning level of the individual doing the resistance training is low.  There’s a reason most mobility exercises are performed unloaded.

On that notion, I can’t help but think that I was in my most athletic physical condition when I was a competing track athlete.  Granted, I was lighter, and younger. I was also weaker.  But if I was hitting the iron every single day using various workout styles, I may look good and get into great shape too, but I believe my conditioning and good shape would be slightly task-specific. There is and will always be a difference between training to simulate certain movements, versus actually doing them. It’s the reason we as sprinters and jumpers spent more time on the track and field than in the weight room, in order to become faster sprinters and further jumpers.  I maintain that someone who’s been in the gym hitting it hard the past 5 years would still get crushed from a conditioning standpoint in his first day on the football field – or even if he’s late for the 95 bus heading downtown and has to run 5 blocks to make it in time.

So I do think running deserves some credit for that reason. Maybe it’s a bias. But it probably isn’t.  This is the one area (of two) where I have to tip my hat to CrossFit. Having versatility in training styles – which includes things outside weight training (like running) – is an important element for overall fitness, as long as it’s not taken too far.

Sadly, the majority do. And they have the bodies to show for it – anatomically, biomechanically and physiologically.

It’s really silly when someone says brief jogging sessions will immediately kill all your gains in the weight room – especially if you’re trying to build muscle. Just as silly as saying strength training will slow a runner down and cause injury.  Looking at things from a stilted perspective creates the perfect stage for a debate that sees no resolution.

So what do you do now? If you wanna run, that’s cool.

For a half hour? 45 minutes straight? Fine.

Do yourself a favour, and run to the gym, lift heavy things a whole bunch of times, and run home