Afraid of a lil' butt-wink? You may just be searching for reasons not to squat. 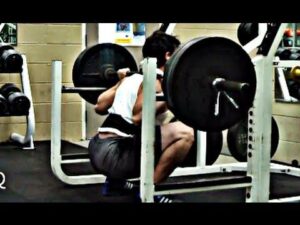 When someone hears something new in the fitness industry that actually has a bit of truth to it, it immediately gets blown out of proportion.

It’s something anyone who’s spent time in this field can and will agree to. As a result, unsubstantiated opinions start to circulate and become the “going gospel” for coaches to infuse into their training vernacular to impress clients. It also becomes gospel for gym rats who want to learn a thing or two from the pros.

The truth is, many certification bodies responsible for licensing trainers to do their job, typically use the “better safe than sorry” method when it comes to movement cues. That means you’re not supposed to go down below 90 degrees on the bench press. It means you’re never supposed to let your knees pass forward over your toes – ever.

Of course, as you gain more experience and knowledge in the industry as a trainee or a trainer, you’re able to quickly identify those blanket cues as myths and explain the benefits of “breaking the rules”, as it were.

But squats seem to be a whole other animal.  In reaction to the several years’ worth of trainers I’ve overheard, YouTube trolls’ comments, and other misinformed people, I’m here to address the topic of breaking parallel. The “safe” method will preach that squats should be performed to a depth where the upper thigh is just about parallel to the floor. The knees shouldn’t pass the toes, and if at ANY point, there’s a shift in your pelvic tilting (or any “butt wink”), you’ve gone too deep.

We all know the benefits of deep squatting. But I’ll be damned if someone tells me that if the pelvis “tucks” to any degree during a squat, that the spine is now completely at risk and out of position to bare load. Butt wink is relative. If there’s a subtle positional shift that takes you from anterior pelvic tilt to a neutral spinal and pelvic position, that’s fine.

Don’t get me wrong. I BELIEVE in butt-wink. But I also believe that people are blowing that phenomenon out of proportion, and selling themselves short as a result.  A trained eye will recognize real “butt-wink” when it sees it.

First of all, most people get into a poor starting position with excessive back extension, then failingly attempt to maintain such a rigid back arch through the entire movement. In reality, this will just allow for an earlier butt-wink that’s even more pronounced. It doesn’t mean your hip flexors are too tight, nor that your hamstrings need a stretch. It means you’re setting up in a way that facilitates a shorter than optimal range of motion, since a strict arch in the low back promotes an anterior (forward) pelvic tilt and contracted hip flexor muscles to start.  Furthermore, watching any squatter perform a full depth lift will exemplify that it’s virtually impossible to maintain an actual positive back arch (or extended back position) through an entire, ATG range of motion. Whether we’re talking about powerlifters, Olympic lifters, or average clients, I’m yet to see anyone who can accomplish this.

I’ll say it again – a shift to a neutral spine (which will involve minor “wink”) when squatting is NOT a cause of concern when breaking parallel. A shift to a flexed spine definitely is (much more “wink involved here). The latter is also a significantly weaker position, which, in most cases, won’t hold up under plenty of weight.

Lots of influences can affect the severity of butt-wink and whether or not it should be a cause for concern. Included is your skeleton makeup – especially at the hip joint, your joint mobility, and, of course, the flexibility of your muscles.  Needless to say – become as mobile and flexible as you can, in order to promote the deepest and most technically sound squat depth you can. But don’t get wrapped up in the butt-wink scene. Know the particulars and understand the difference between what permissible form is, and what truly risks your body’s health.

Too many articles I read don’t take into account the incredibly important variable of the lifter’s body type.

I don’t mean the lifter’s muscle mass or body fat percentage. More so, the lifter’s anthropometry. The skeleton frame of a lifter can be the make-or-break factor as to whether an exercise can be performed in a cued way, or whether it’s a write-off.  A common corrective movement for squat posture, alignment and floor drive is the wall squat. In this exercise, the lifter is told to face any wall, keep is toes against said wall (if not against, then no more than a couple of inches away), and squat as deep as possible before losing proper form or balance, and without letting any body parts touch the wall.

In theory, this is a smart movement that can make squat technique undergo positive change. Once again, it encourages good posture and a tall spine when squatting. But it neglects to address the skeleton frame of each client and can make certain clients believe that they’re incompetent at the movement, when in reality, they’d never get better using that “test” as a guide. Without getting into particulars about bar position (high vs. low bar, front squat vs. back squat, etc) and its effect on squat geometry, it’s useful to consider how the presence of long femurs, short torsos, or even small feet can change the game.

The best example of an exception to the wall squat test that I can use is, well, me.

At 6’4”, my long legs will always ask for the knee to pass forward over the toe for a full depth squat to be achieved (for an “exhibit A”, refer to the above picture – that’s me). If this didn’t happen, I’d simply fall backwards due to the centre of gravity not being in proper balance.  If Olympic lifters who are predominantly shorter than I am with better proportions which are more conducive to weight training and deep squatting all let their knees pass far over their toes when squatting, it’s safe to say that the cue of allowing this to happen isn’t a bad one when it comes to baring load. Logical research would confirm this.

You’ll be able to determine the experience level of a coach based on whether he treats a “corrective” like the wall squat as gospel, or whether he uses it sparingly and selectively, or even not at all. In my opinion, you’re not losing anything by dropping it from the tool box, as it’s helpful to remember that people come in all shapes and sizes.

OH, AND DEATH TO BALL SQUATS

Teaching a complete beginner to squat by making him lean against a ball rolling up and down the wall may ensure that he sits into the heels and brings the butt back, but it also promotes zero upper body tightness, due to the fact that the body’s now kinesthetically inclined to rely on that ball for its support. Also, ball squats create an unbalanced position where the center of gravity is once again behind the feet.  When the feet are located in front of the centre of gravity, no hip drive will be encouraged to finish the lift and stand tall (since the lifter will be leaning back slightly at the top).  Ball squats are a training tool that reinforces dysfunctional movement patterns and inadequate technique. I’d compare them to training someone how to squat using the smith machine.  In my opinion, the goblet squat and the box squat are ideal tools for a client’s first exposure to loaded squat patterns after bodyweight and mobility based training.

I’ve said this many a time, but this industry is full of opinion, and nothing’s written in stone. With that said, constantly keeping abreast with research, new information, and other philosophies is the only way to stay on top of your game – and of course, practicing your craft as a coach or lifter goes without saying.  The last thing a trainer or serious trainee wants to do is barricade himself from a wealth of knowledge by staying within the confines of the few blanket cues he learned upon his introduction to fitness. Asking questions to answer “why” is worth its weight in gold.