We’ve been Coddling our Insecurities for Too Long

'Cause the internet could use a kick in the face.

It can be pretty impressive when you take a step back and contemplate just how far Western society has come where technological advances are concerned. Access to knowledge, networking, and countless other things are at our fingertips.

But let’s face it. Today, more and more people are becoming millionaires by doing absolutely nothing useful.  That sounds pretty awesome, but it should instill fear in the level-headed civilian. Not only is our society’s health and wellness becoming more of an issue, but it’s also seeing hard work lose its place as a rite of passage for success.  People seem to think this is only polarized to secular work, but it’s actually something that permeates nearly every element of the average person’s life.  If we could download an app on our iPhone that chewed our food for us, I’m sure that app would be worth billions today.

Popular culture as its own industry does too much to protect the insecurities of the average person, so at no point do they ever have to face them. The common theme of many of my blog articles is one that highlights the lack of authentic fitness information as it applies to a trainee actually receiving real and sustainable results. The truth hurts sometimes, and where daily living is concerned, that truth has been concealed for too long. So here it is.

We are an overfat, lazy, and entitled society who are quick to compromise our beliefs or even our values to fit in with a crowd, and even quicker to cut corners for short-term gratification.

Again, I’m not just referring to one walk of life here – I’m referring to almost all of them.  The numerous “social experiments” flooding social media platforms can raise awareness to the fact that an abundance of people don’t care about other people, or won’t speak up in a circumstance of moral question, or have a predilection for creating stereotypes – But none of this does much to change the dynamic of society as we know it.  Let’s get real. Popular people say something is cool, and like sheep, the masses follow. Popular people say something isn’t cool, and again, the same thing happens.

It takes more than a vitriolic Facebook rant or shared quote on Twitter to change the way things are going down. We’ve done enough to spread “awareness” of certain issues. We’re all aware. We just don’t want to put in the work to make things different.  As regards fitness, we gravitate towards what’s easy, and seek comfort among the similarly lazy and unmotivated when we don’t end up getting the results we were originally looking for.  It’s why body shaming is a movement that’s become blown out of proportion. It’s why for every gym equipped with great trainers and a focused mission statement, there’s another gym in the same city with “judgment-free” training zones, and alarms that sound off if you’re so brazen as to exert yourself. It’s why “individualist” movements are popping up left, right and center, despite the fact that their very existence is a bit of an oxymoron.

Normal is the New Hardcore, and That’s Not Good

I’m a fitness guy, so I’ll keep this on topic.  The media simultaneously promotes taking extreme measures for fitness (like training so hard that you see some spots in your urine, with “no excuses” when it’s time for your next gym session) along with, by contrast, embracing yourself regardless of the level of unhealthiness of your physical habits. In both cases, it fully overlooks the fact that a different psychological approach must be taken if the goal is to be both healthy and happy after years have passed.

For the people in no-man’s land, they’re stuck having to pick a team. When combining a lack of training knowledge with general laziness, the odds don’t bode well that they’ll make a smart choice.

I’ll bet that a fair percentage (but not all!) of the people who get suckered into fad diets, infomercial fitness trends and the Kardashian Workout Plan have indeed knowingly suckered themselves.  A possible fear of putting in work to get results, combined with the placebo effect of investing money into health endeavors is likely enough to justify one’s place. People are going to the gym more for the selfies and the online applause than for the workout.

But things have taken a turn for the worse. It’s not only hardcore to do a brutal CrossFit workout. It’s now hardcore to lift weights, it’s hardcore to train 4 or 5 days per week, it’s hardcore to be strong, and it’s hardcore to watch what you eat.  And the media’s making sure of it.  Promoting alternative fitness methods that accomplish nothing but the placebos mentioned above is the media’s billion dollar way of duping the masses who just happened to be looking for the next corner to cut for their own fitness. Pop culture’s way of capitalizing on someone’s desire to find the easiest way to get in shape while begrudgingly going through the motions is the nearly impressive tactic that no one talks about. This isn’t a case of a poorly misled fitness-minded person with the best of intentions. It’s a case of a grown-up with an otherwise rational mind deciding to put logic on the backburner for the sake of a back-pat they can publish on Instagram.   Now, what used to be fairly black and white terms like “strength” have become muddled into a number of interpretations depending on the cash-grab industry that decides to use it to fit their sales pitch.

The difference between this statement and the social impropriety that comes with stereotype-based discrimination is that unlike color, one has the power to naturally and healthily change his fitness levels.

Instead of urging people to do absolutely nothing but develop a newfound confidence in the very bodies that at some point in their lives were likely a source of insecurity or lowered self esteem, the truth must be revealed that there are far fewer methods to get in shape than are promoted, and each of the options involves hard work, done over an extended period of time.

For the record, I’m not speaking for people’s personal taste. If you’ve got a penchant for the obese, or find someone with no lean tissue appealing, that’s no one’s place to judge.  I’m also not saying everyone who’s over 19% should be ashamed of his or her body. I’m speaking strictly from the standpoint of a health-conscious individual who does this for a living.  It’s cool to be confident; as long as you’re aware that in your current state, your health could benefit from a tune-up.  These so-called support systems double as easy scapegoats for people who aren’t motivated enough to confront their potential sources of insecurity and work to see the changes they may have always wanted. 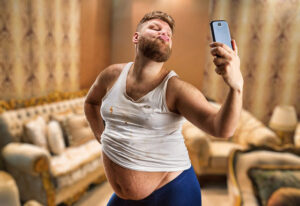 And here’s what we should be ashamed of: We’ve somehow successfully developed and maintained some “template” for everything: our dress, our style, our bodies, our views, our interests. It’s kind of like high school found a way to extend itself into adulthood. In some ways it may be convenient, but where fitness and health is concerned, it can be the driving factor that steers a person away from a simple fact: Either you’re fit and healthy, or you aren’t.  And if you tend to fall somewhere in between, you’re either on your way towards fitness and health, or away from it based on the habits you’ve decidedly adopted. Instead of finding a new, trendy template to disappear behind for convenience’s sake, it’ll probably be worth it physically and mentally to put in the work and face the facts.

Sad to say it, but for the most part, the “fitness industry” doesn’t have your best interests in first mind.  There’s also a reason why fast food is so cheap, so accessible, and tastes so good. These days, the road less traveled is the one that involves putting your head down and putting in hard work that will stand the test of time.  We’ve decided to counter negative labels by simply remaining the same and creating positive labels in their place, but it doesn’t solve the problem of each person’s individual health, or the obesity crisis in the Western world.

It ain’t hardcore to walk to the gym, do a solid workout, have a good meal, and repeat.  Besides, “gym rat” is one template worth having if your own health is what’s on the line.