Where “Fitness Testing” Drops The Ball

When the point of the typical fitness test strays from what really matters in the world of training, I raise an eyebrow. 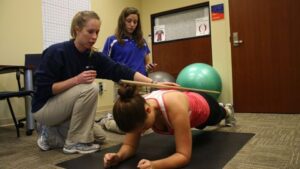 This website is generally overrun with content that supports the use of the basic movement patterns and moreover actually training as the best way to see results.

And I still believe that.

Simply put, there’s a difference between understanding what assistance exercises to apply to your workouts to help the efficiency of both those movements and your body, versus ostracizing any major exercise in light of the fact that you’re having trouble “activating” certain regions. In my books, the point of assistance exercises is to do just that – assist the primal movement patterns. They have their place in the system to make moving a simpler task, and carry over to the lifts that most would agree are of superior importance.  For many of us, step number one comes from simply learning good technique through proper cues to the basic movement.

The primal movement patterns – squat, press, lunge, deadlift, and sure; I’ll even add pull ups, push ups and rows – don’t take copious amounts of strength to learn to do with technical precision, for the most part. What they do require plenty of is mobility. Therefore it’s safe to say that if you’ve found you’re having deficiency making your abdominals fire during a squat or press (for argument’s sake), learning the cues to make the movement technically sound – which often comes down to learning to possess the mobility and freedom of movement to achieve full ROM and furthermore reach desired skeletal positions – should make the targeted muscles begin to activate.

My Problem with the Gym “Fitness Assessment”

You may remember me saying that commercial gym chains often pride themselves on thorough investigations of clients’ fitness, often using methods to measure body fat percentage, questionnaires to determine a prospective client’s lifestyle, and more.  Good on them for taking an interest in the client. But the business wouldn’t be a business if it didn’t make a few greenbacks.  With that said, when it comes to the on-the-floor fitness testing, there’s no one out there who actually “passes” the tests!

Okay, sometimes we come across a well-to-do fitness consultant who realizes that the client’s levels of knowledge actually surpass the mock sophistication of the fitness assessment protocol, so they thank the client for their time and patience and send them on their way without pitching them 156 sessions with a specialized trainer on their staff who would be a “perfect fit”.   Those examples aside, many times (read, all times) the fitness assessments are structured for the end result to be for the client to buy training sessions with one of the experts.  Elite level athletes aren’t walking around everywhere we turn, so it’s understandable that people need work, and help moving right.  But the methods still make me call hogwash. I remember at the commercial gym I worked at, the hook, line and sinker was to get the clients on the BOSU ball during the fitness test and insist that instability training with a unilateral emphasis is the ultimate training condition they should want to work towards.  When they couldn’t even do a basic squat on the BOSU in the first place, having a consultant ask them to do a single leg RDL on the thing during the assessment would be next to impossible. When they failed, it would just be further testament to the fact that they needed help.

Maybe that example was a bit…“extreme” (some of you will catch that one).  But my issue really lies in the avoidance of training people how to move properly in the most basic form. If someone clearly demonstrates a need for assistance training, via poor mobility resulting in a bad squat, horrible pressing form, a tonne of weakness, and low kinesthetic awareness, the answer is NOT to avoid primal movement patterns until they’re “ready to train them” later on.I’ll never believe nor practice that, and it drives me crazy when I see this.  The most important way to get better at a movement is to do the movement. Even if the muscles aren’t activating in their optimal form or pattern, it’s still more important than anything to achieve the positions.

It’s basically like saying “you’re so bad at this super important exercise, that we won’t do it. We’ll do these instead, which can help the improvement of the exercise we’re avoiding”.  What if we took the same client whose knees cave and back rounds when squatting to parallel and make him get his butt right down to the floor – Unloaded, and with no regard to anything other than keeping the heels down? Putting the elbows between the knees to shove them open wide, and encouraging a tall posture?  The very reason he could be so bad at this exercise is often because he never practiced doing it enough.  Of course, the Peterson step ups, TKE’s, Single leg bridges, box squats, and thoracic extension drills can all help his cause, and should be used. But his focus should be to continue learning to squat.

And this isn’t a question of loading up on weight. I don’t believe in adding weight to a movement if the technique isn’t there while unloaded. It makes no sense.  I’ll do bodyweight squats with this guy as long as it takes until he exhibits proper form doing them.

To think that there are otherwise medically healthy folks walking around thinking, largely thanks to professional advice and coaching, that they’re not “ready” to start squatting or deadlifting because of their present muscle imbalances is saddening. In my books, regardless of the vehicle used to assess a prospective client’s abilities, the end goal should be to help the client move well, to make improving performance at the primal movement patterns a possibility. Regardless of the client’s goals, having this in place is essential as they serve as the hub to every fitness goal.

Take the Functional Movement Screen, for example.  There was a time when it was revered above many other assessment tools. I have to say that out of the 7 step procedure, the two most important tests in my opinion are also the two most primal movement patterns of the test – the overhead squat and inline lunge. From those you get a picture as to the health, mobility and stability of basically all of the client’s load baring joints. A smart trainer could almost predict what the outcome of the remaining tests would be based on the performance in the first two.

Bodies are adaptable. A client won’t die if he practices a movement and it takes time doing it to get the form right. That’s what practice is for.  As long as a primal movement causes no pain, there should be no reason to stop practicing it for any significant period of time.  I highly encourage adding to that practice by way of supplementary exercises. It can definitely speed up the rate of change we see.

My take home point is this: Technique goes a long way. You can only get good technique in the most important lifts, by doing those lifts.  Try to learn perfect technique of lifts before resorting to an investigation of the minutiae of your weak links. Those weak links may indeed be present because you never learned to lift well in the first place. It’s really some food for thought, and it’s almost unique in its simplicity.