Women: You have a Tough Deal in the Fitness Game, And it’s Everyone’s Fault

But don't cry over spilled milk if the industry has its hands on your udder.

My industry is excoriated by white-collar fatheads and old school sticklers more than any other industry we can think of.  It’s an uphill battle to deal with people who won’t recognize that fitness and health isn’t something  the average person can just “figure out” with no assistance, and this joust between fitness professional and layman proves more challenging when we show up to work wearing a track suit, with a playground for an office.

Sorry to be the bearer of bad news, but it gets worse. If you’ve read my stuff, you know I often mention the fact that most of the large-scale platforms used to publicize fitness truths are occupied by duplicitous coaches who have made the executive decision to sell themselves out in the pursuit of money or commercial celebrity. It’s a sad reality; one I’ve still not come to terms with.  Fact is fact -If you want reliable training info, you’re not going to find it by turning on the tube and catching the latest infomercial or morning show.

A World of Unreality

Those people on those shows also have bodies that irrefutably “look the part” – chiseled, dry and shredded, and somehow claiming to pay tribute to the futile training methods they’re trying to promote on the air. Not only is it misleading to think people walk around looking like this every day (or even that they should), but it also increases the stock value of the notion that a coach’s merit should solely be based upon how amazingly jacked he or she can get.

When this subject matter is focused towards the crowd of female trainers and strength coaches, the plot thickens.  Essentially, we’re taking a world that’s already built its norms around judgmental attitudes that usually crack down a bit harder on women in secular life, social life, and popular culture, and then we’re adding the smaller world of the oft-berated fitness and health industry along with its own preexisting judgments of what a trainer is, how seriously the study of exercise science should be taken, and what a professional of such an industry should look like to be considered “fit” and competent.

Finally, we insert those already-prone-to-judgment ladies into the already-prone-to-judgment industry, and ultimately find ourselves in one dilly of a pickle. The fitness industry will often use sexuality to make their products sell, or to give the idea of training more appeal, and women are most usually the butt-end (no pun intended) of this venture.  Many fitness magazines, companies and websites are often bashed for displaying cover images or article images and videos of women posing or working out in what I’d only assume is uncomfortably scant attire.

It’s all become such a norm in the industry, mainly because there are a comparably smaller number of voices being heard to say that it definitely shouldn’t be one.  It can act to take fitness out of context and can also cause the public to create a division between “women’s training” and training in general.  In many cases, it can send the wrong message to the masses, the same way soft drink and fast food commercials only portray lean, in shape people enjoying the product, or the way online dating site commercials show the most attractive “singles” anyone’s ever seen.

This misrepresentation comes down full force on the legit female strength coaches and trainers in the industry who are cognizant of the state of the industry and deliberately try to stay away from this side of the spectrum. Just like any good coach, they have solid content and training to offer the masses, but the problem is, the cards are inevitably stacked against them if they don’t “conform”.  I’ll probably take a lot of heat for saying this, but I’ve found that a large number of young female clients who hire a female trainer to help them get in shape, do so with a trust that is dominantly based on how that trainer looks – at least around here. A big part of this can be because they’ve become caught in the same matrix and social stigma that creates this problem in the first place – and it all makes their goals short-term and exclusively cosmetic to boot. It gives many fitness competitors full rosters of private clients. 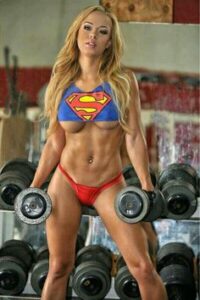 Granted, there are the choice instances where a legit female trainer is contacted by, say, a powerlifter in search of a 600 pound squat.  She refers the client to another coach because she may not feel as comfortable spotting lifts that may far surpass her own personal maxes, or coaching elite strength levels according to many listed male strength standards.  There’s not much that can be done about this, and that’s a judgment call that should be approached on a case by case basis.

Many women likely succumb to the external pressures to let sexuality sell via provocative photos and videos that have less and less to do with actually working out. After all, this is how a fair ratio of the industry mocks them up to begin with. It’s easy to feel like there’s no other way to succeed in the industry.  The truth is, in the eyes of the general public, what makes a “good”, “sought after” male personal trainer, isn’t entirely the same as what makes a “good”, “sought after” female personal trainer, when in reality the components should be completely identical.  We can especially see this rift when looking at the way each tends to be marketed, and what crowd they can end up catering to by default.

If it wasn’t for television programs, Hollywood trends, and social media “empowerment” movements that usually miss the point, I believe such a rift between the sexes wouldn’t exist, and the industry would probably be much more substantive by extension.

You’re Not in the Clear

This isn’t to say that each and every woman who’s a victim of this was left stranded in her innocence.  Like my title says – this issue is everybody’s fault – and that includes the women who egregiously perpetuate the cycle.

In the hip hop world, many female rappers who make it really big do it by combining some relative talent with a whole lot of suggestive lyrics, mannerisms, and outfits that can end up making them the same focal point for objectification that many unconscious male rappers are protested against for including in their songs and videos.

In the fitness world, I see much of the same thing; a classic case of being aware that a problem exists, but feeding into it anyway.  It’s good for a brief cash grab, maybe.

But that’s about it.

Sometimes this behavior is weakly shrouded by hackneyed mantras like “if you’ve got it, flaunt it”, or something similar that make terms like “inappropriate” conveniently go out the window.  Other times, it’s genuinely mistaken for “good”, “proud”, and “confident” by way of stripping down to a thong and high heels to reveal a short-term version of yourself, so a panel of judges can rank you based on your physical appearance – and accordingly rank your self esteem while they’re at it.  Whether you want to agree with the above or not, it’s clear that both of these acts can feed the very beast that more than a few women despise.

I would think that using social media to market yourself as a female fitness professional is a venture of endless judgment calls; it’s easy to cast the wrong message off to the masses, especially if you’re going for a certain vibe or group of clients.  Sadly, getting “labeled” is real and I suspect less avoidable as a female.  A person’s public image and “personality” is nurtured over time, and followers, prospective clients, and colleagues develop a feel for this with more exposure to that person’s thoughts, style, and visuals – all three of which you control when it comes to social media outlets. It may mean a smaller following, but at least it’ll be a better kind.

Yep.  The past 1500 words featured a man cracking down on women. I went there.

In actuality, sex sells. But it just sells sex. Hardly ever good, knowledgeable training, let alone a healthy protocol that can act to bulwark one’s self esteem. The goal should be to make the things we see that tie into delivering the wrong message a clear-cut minority, which can only come about by changing public opinions.  It may mean more cover models in t-shirts, or more instagram trainers seen actually, you know, training, and generally wearing clothes to do so, but at the end of the day, it’s probably for the betterment of the industry, and most importantly, our clientele.

Plus, walking around the gym like that must get pretty cold. No?