Because he trains better than most of your clients used to. 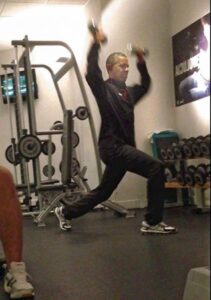 The President of the United States was surreptitiously recorded doing a workout in a Polish gym, it seems.  As is the going trend, pundits on the web have had a field day since its release due to the technical missteps he’s taken in the footage. If you haven’t seen the video, then here it is.

Before I continue, I’m going to reference a similar opinion piece I wrote months ago about Drake’s deadlift technique.  On this note, I want to mark the glaring importance of one point. As a coach, I write a lot of pieces about improving the quality of the industry by way of more knowledgeable, realistic and sensible coaches. There’s no excuse for a paid trainer to be engraining and praising poor technique – and it’s even worse if both coach and client truly believe that the technique being used isn’t poor.  That appeared to be what was happening in the Drake video.  It’s no secret Drake has a trainer.  Some of my buddies have even gotten in pictures with the guy. Based on the way the audio sounded, he may very likely have been the one who recorded and uploaded the deadlift video in the first place.  I took the time to correct Drake’s form in that article because it was poor, and the second professional party didn’t seem to be doing that based on the video. Check out that article here.

But I digress. In THIS video, Barack Obama is seen searching for his own dumbbells, and he’s wearing earphones. It’s a safe bet to say he wasn’t being helped by any trainer, nor was his trainer the one recording the video, especially since it’s presently ruffling feathers on the grounds of federal security.

But it’s the President, right?  He’s gonna have the best trainers available to him at his beck and call.

Let’s be real for a minute.  This guy’s in a different country every week.  How much personal training could he get, even if he could help it? His most recent personal trainer, Cornell McLellan, noted in an interview that the entire First Family tries to incorporate exercise for an hour daily, but due to the rigors of their schedules, sometimes 2 days per week is all they can make. An erratic schedule coupled with a trainer who’s based in Chicago coming to the White House for the odd 1 on 1 or family session, doesn’t really make for the most training progress. Just sayin’.

On top of this, if the CEO’s that I work with myself on a regular basis have enough on their plate than to put their personal fitness as absolute top priority above their jobs, families, and recreational lives, then how’s one to expect the Prez to?

The funny thing is, most of the 52 year old men I’ve worked with in the gym who fit the description above, would trade bodies with the equal-aged Barack Obama in a heartbeat. He’s slim, moderately athletic looking for his age, he doesn’t carry a gut, and looks sharp in a good business suit. So why the internet hatred?

Well, ’cause he works out funny. Duh.

I’ve been reading fitness articles on site after site that are trashing his workout methods as though he somehow should already have known better. He clearly didn’t even know he was being recorded in the first place – and I’m sure he would have preferred to keep the cameras off if he could control the situation. Between balancing the budget and negotiating situations in China over maritime disputes, there’s a low chance that he’s going to spend his downtime flipping through the pages of Men’s Health or logging on to TNATION.

And here’s the best part – he didn’t even do that bad.

Sure, he’s using incomplete ranges of motion, and his technique and tempo could use some refinement. But, assuming getting HUGE isn’t the 52 year old U.S. President’s goal, I wouldn’t say he’s training like a complete doorknob in this video. He’s included compound movements like step – ups and overhead presses, included the lower body into the mix, and even opted to do his cardio after his workout!

The backlash that is present on the intrawebs surrounding this video is just evidence of a greater issue that is present within the entire fitness industry. Obama isn’t a fitness expert by profession. He’s a politician. As such, he shouldn’t know the “best methods” for exercise, or “perfect techniques” for lifts.  Whether or not he’s still working on and off with a trainer of any sort is hard to guess. We’d have to ask him.  Will trolls really go so far as to stray from hating on other fitness experts, to hating on unassisted (and unwitting) trainees? Have they run out of people to troll? To me, it’s the equivalent of the president facing heat and scrutiny from hockey coaches for stepping on the ice during some downtime, and being a poor hockey player – simply because he hasn’t been coached on how to become a good one.

My boy Bret Contreras wrote an article addressing trolls hating on the workouts of public figures (referring to Hugh Jackman). You can check this out here.

With the zero guidance he’s evidently being given in the video, Obama could have easily been doing a Yoga or Zumba or Pilates workout, which would indeed be an eyebrow-raiser in itself.  Extracting the good points from this, however, we glean:

As a citizen of a city whose leader is a 320 pound man currently in rehab for crack cocaine abuse, I applaud Obama’s efforts on the upkeep of a healthy lifestyle. Politicians get bashed enough for their administration. Why stir the pot and spawn more trolls in the locker room drain filters? It doesn’t help anyone.

Thanks for working out, Barack Obama.

And, oh yeah. Try to use full range of motion. K?